Having discovered a large pit containing rubbish thrown away by the rector George France in the 1870s, we decided to hire a 1.5 ton digger, to extend our excavations, for we still had little sense of the size or gradient of the filled-in hole. Tom, operating the digger, cut away first at right angles from our original hand-dug trench, with a view to excavating a quadrant. As the machine scooped its way easily through a thick layer of ash, we could tell we were nearer to the middle of the pit. Beneath the ash were the seams of rubbish we had found in the hand-dug trench, but now they were thicker and deeper, lying at their thickest in the belly of the pit, where heavier dumped material tends to settle. Whole bottles, larger fragments of broken ones, larger pieces of crockery, bricks, rubble and big metal objects began to appear about five feet down. At seven feet we came across clean sand, the bottom of the pit, showing that this one, like the later dell containing the 1910s rubbish (see Part 1), had been a sandpit, accessed via the cart track on the other side of the present boundary. 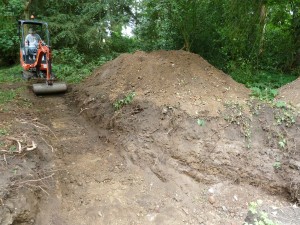 Tom excavates a path into the pit 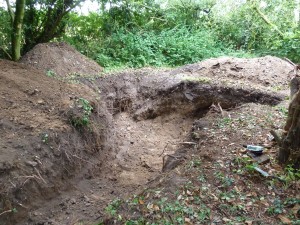 The pit opens up, with the access route for the digger in the foreground 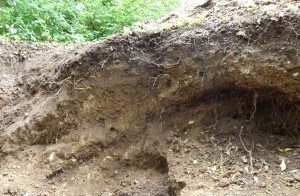 Layers of tipping and capping sloping down to the left, as seen in the section 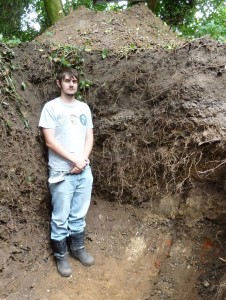 Tom stands on the sand at the bottom, 7 feet down at this point

This was not quite the middle of the pit, but we were getting closer. You can see Tom standing on the orange sand (the natural) in the photo on the right. Behind him, the pit rises sharply in front of the tree and the boundary/ cart track. To his right and slightly behind lies the thickest seam of bottles, crockery and other dumped material. In this layer we found a cache of enormous (farmed) oyster shells and a bucket in situ in the section, containing bones (fine butcher’s cuts). There was also part of a large crab’s claw indicating the consumption of dressed crab. Great Yarmouth and Lowestoft were the closest crab fisheries. Plain white jam pots had been thrown away in abundance. Most were intact. A couple had been re-used for yellow-orange paint. Some had a stamp for the potter Maling of Newcastle the largest supplier of such pots, and a couple were printed with the familiar logo of Keiller’s Dundee Marmalade, mentioning the prize medal of 1873. One of these pots was found intact in the lowest layer, establishing the fact that the sandpit had been filled after that date. 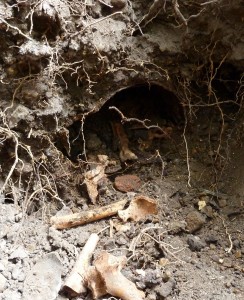 A bucket of good butcher’s cuts, under excavation

Stoneware blacking bottles were the most numerous vessel to have survived intact, although a few were found broken. The reason is that a lot were used, they were thrown away intact because the residue made they unsuitable for re-use (and in any case they were cheap and non-returnable), and, being sturdy, they survived the buffeting of being thrown into a bin or cart and dumped into a pit. For wine and spirits bottles it was very different, because bottles of this sort could be returned to the retailer (who might re-fill them) or they could be re-used at home. Being glass, they are more fragile with natural points of weakness at the neck and the centre of the body, where the glass is thinnest. So although we found well over a hundred broken examples, not one intact wine bottle surfaced. Nevertheless we did find two that had been thrown away intact and broken where they had landed. One was a Hock bottle, and the other is a dip-moulded dark green wine bottle with a base kick and a sand pontil scar. Fragments of identical bottles were found in some numbers, but this one alone had certainly been discarded intact. Together these bottles show that the household did not have an absolute policy of re-using its wine bottles. 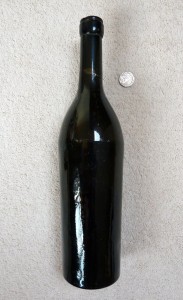 Numerically, wine and spirits bottles were the best represented type of bottle in the pit, although all (so far) had broken. The next most numerous category was mineral water bottles, of which there were several varieties, the commonest being light-green, dip-moulded, blob-topped bottles for natural mineral water (i.e. still rather than sparkling). Three were found intact, though one has wear marks to the base and contained some substance that clearly wasn’t mineral water. This one had been re-used. The bottles, stylistically, may be German, and were found alongside a handful of embossed mineral water bases, stating that their contents came from Carlsbad and Friedrichshall (both mineral springs; the latter exported still water). There were also earthenware flagons for seltzer, stamped Niederselters, Nassau. 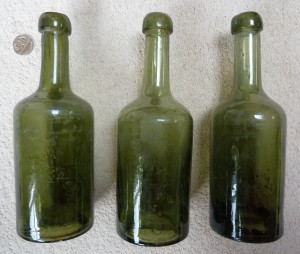 With the exception of the seltzer flagons, the bottles imported from Germany appear to have contained still (natural) water. The English bottles, however, contained pressurized i.e. carbonated water. There were Hamilton bottles of thick glass (to withstand the pressure), embossed with the name & London address of the Schweppes factory, and for ‘Pitts Double Soda Water’. Most importantly, there were a number of fragments of thick-glassed bottles for carbonated mineral water embossed with the name of a local manufacturer, J. A. Everson of Harleston. 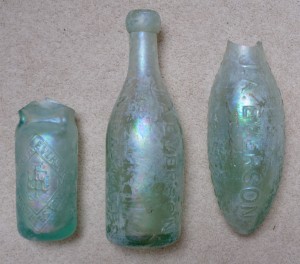 Everson’s bottles for his own mineral water

Harleston is only a couple of miles from the rectory, being the nearest town. J. A. Everson is listed in the directories (1877 & 1883) as an importer of foreign wines, spirits and mineral waters. He manufactured mineral waters too, and must have intended to sell them to customers further afield, given that he had ‘Harleston, Norfolk’ on his bottles. (It’s very rare to find a local manufacturer including the county beside the name of the town.) Everson used three different types of bottle for his water, all in thick glass, as shown above. On the left is a Codd bottle made by Alfred Alexander & Co of Leeds. In the middle is a flat-bottomed blob-top bottle made in a post-mould. On the right is a Hamilton. Everson employed men to deliver his wines and minerals in a dray. It is virtually certain, given the presence of his bottles, that he was one supplier of the rector’s foreign wines and mineral waters. The dray would have arrived regularly with the rector’s standing order and returned perhaps with empty bottles. Everson could not have re-filled the German bottles, which were imported with the water sealed inside, so they went straight into the bin. But he could have re-filled his own and could also re-fill the wine bottles, if the wine was imported in casks and decanted into cheap bottles blown at a  local glassworks. Fragments of bottles for whisky, sherry, and gin were also found. In adverts, Everson prided himself on his Dutch gins. Champagne bottles were much sturdier than other bottles for alcohol because they had to withstand the high pressure. French champagne was imported in these bottles, which were discarded when empty and often survived the journey to the bottom of the rubbish pit, as four intact examples (two large, two small) attest. Everson’s imports would have arrived at Great Yarmouth. From Beccles, they could reach Harleston by Waveney Valley Railway Line. 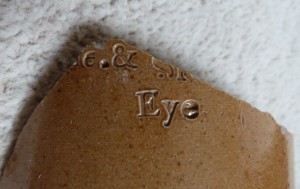 Everson may not have been the only supplier of wines and beverages. A fragment of a stoneware porter bottle (right) has embossed upon it what is left of the words ‘Wine & Spirit [Merchant], Eye’. Eye was a few miles away across the Suffolk border. Unfortunately the retailer’s name is missing, but he may have been one of Everson’s competitors, receiving occasional orders from the rectory. Much would have depended on what these retailers had in stock at any given time.

Other household patterns of consumption and waste are revealed by a number of medicine bottles, mostly of a light blue glass and made by the York Glass Company, although they also included moulded bottles for patent remedies (see Part 3). The York Glass Company’s embossed trademark was also found on the base of an octagonal sauce bottle and on a hexagonal blue glass poison. Like the Codd bottle made by Alexander & Co of Leeds, these various household bottles had been manufactured in Yorkshire. 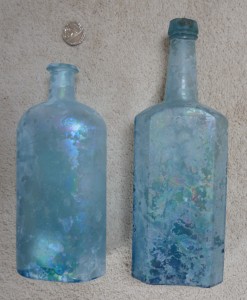 Bottles by the York Glass Company

The bottle on the left is an oval medicine without embossing. On the right is the octagonal sauce, still with its cork in place. Both were made by the York Glass Co. Other finds made during the first session with the digger included pot bases for pot lids, part of a pot lid for Atkinson’s Bear’s Grease (1 shilling size), a plain clear glass bottle for Eau de Cologne, French moulded sauce bottles with labels still visible and the usual variety of high quality and ordinary crockery. After a day and a half, we had hit upon the thickest layer, but a lot remained buried, and we had to move the spoil pile before we could proceed with our last day of digging (Part 3). A selection of the items recovered during the first couple of days with the digger can be seen below: 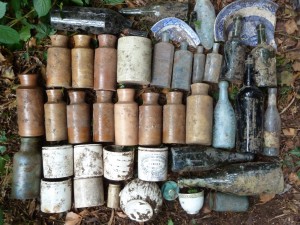