During the first two days of our dig at the Norfolk rectory, we had discovered that the rector purchased imported wines and mineral waters, and that a few re-usable bottles were discarded among his rubbish. On the third and final day a few more interesting details came to light.

Digging into the ash at the rear of the ditch near the boundary, Tom unearthed two German bottles for mineral water from Niederselters, both bearing a seal that was in use between 1868 and 1880. Both had been discarded intact, though one had subsequently lost its handle in the ground. He also found the base section of a large green bottle for C. Oppel & Co’s natural mineral water imported from Friedrichshall, and two bases of similar bottles that had contained mineral water imported from Carlsbad. Indeed the majority of mineral water bottles discovered in the dump had been imported from the famous European spas, suggesting that the rector liked to drink only the best quality water. (Artificial mineral water bottles were far fewer in comparison, even though Everson made his own only a couple of miles away at Harleston.)

The rector, like so many middle class Victorians, also enjoyed effervescing salts, which were thought to raise the spirits, settle the stomach, generate an appetite, etc. Bottles for Eno’s Fruit Salts are found in rubbish dumps all over the country. Early ones, dating from the 1870s to early 1880s, such as the two broken examples we found at the rectory, are embossed ‘J. C. Eno’s Effervescing Fruit Salt’. In addition to Eno’s products, we unearthed two bottles for ‘Lamplough’s Effervescing Pyretic Saline’. These had all been discarded intact, along with the medicine bottle still with its cork and red-coloured contents, embossed ‘Roche’s Embrocation for the Hooping Cough/ W. Edwards & Son’.

Another import enjoyed at the rectory was ‘Moutarde Maille’, the luxury French mustard, which was imported in ceramic jars like the one below.

Tableware ranged from the fine ribbed tea cups, egg cups, plates and bowls in gold leaf and green enamel shown in the first photo below, to the ubiquitous blue transferred willow pattern, e.g. the large dish, which also has decoration on the underside. Excellent inlaid tiles from the Broseley Tile Works in Shropshire would have adorned the hallway and porch of the rectory.

Left and below: a large willow pattern serving dish with decoration on the underside. 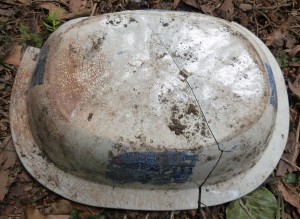 It was clear that George France was a man of means who expected the very best in his food, wines, mineral waters and surroundings. Having rebuilt the rectory in grand Elizabethan style, he added a walled garden with greenhouses; and he also paid for the rebuilding of the church. From the assemblage we found, we had caught a glimpse of his life in the high Victorian era. The presence of a Keiller Jar referring to the 1873 prize medal (in the lowest layer) showed that the sandpit had been filled after that year; and the Niederselters bottles – probably discarded as soon as the contents had been drunk – indicated a date before 1880, when the seal they bore was discontinued. This date-range fits with the stylistic attributes and assemblage of items recovered, so we can date this sample and everything in it 1873 x 1880. We still have not located the rubbish pits for the period 1880s-1900s that may remain in the grounds.