All the Wrong Rubbish

On the hottest days of June, I joined Tom and Chris to search for Victorian rubbish on a farm at Monks Eleigh in Suffolk. Mary, the owner, told us that the rubbish had been thrown into the old farm pond and capped with rubble from the farm labourers’ cottage, which had been demolished in 1910. It was easy enough to find the old pond, visible on old maps and surviving in ghostly imprint as an oval dip, covered with tall nettles. So we started digging in the middle and soon came across the demolition rubble from the old house. Something, however, wasn’t quite right, for the occasional early plastic object was turning up amid the rubble. Even if the cottage had been demolished in 1910, these bricks could not have been dumped at that time. Six feet down, clear of the rubble, we came upon a black and orange layer full of bottle glass; but this dated from the late 1950s. 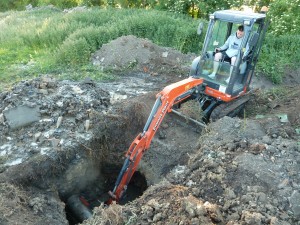 Digging out 1950s rubbish from the old pond

As we dug, the layer became thick and crusty, full of bottles, large metal items, and all sorts of rubbish. But there were no plastic bits apart from an early plastic torch. Jam jars, Corona bottles, Milk of Magnesia, Camp Coffee and Ketchup bottles were abundant in this layer.

We put some of the bottles to one side. 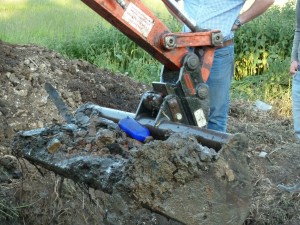 Another Milk of Magnesia bottle!

Digging deeper, we began to find bottles from earlier decades. We were well below the water table of the old pond, with each watery muddy scoop bringing up new material, until we got beneath the 1950s rubbish and into the mud at the bottom. Here we found a thinnish spread of bottles from the 1920s, 1930s and 1940s but nothing resembling the results of organised tipping. These were bottles that had been thrown into the pond occasionally, or had rolled down into the middle from earlier tipping higher up and closer to the end of the pond nearest the farm buildings. 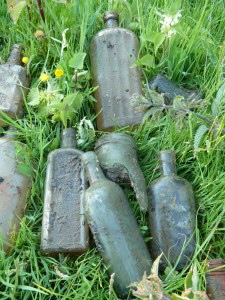 The bottle for Dinnerford’s Magnesia, for example, dates from the 1920s. A few of them were found, no doubt indicating the brand that was used before the Phillips’ brand, ‘Milk of Magnesia’, in its distinctive blue glass bottles became popular during the 1930s.

Where, then, was the earlier rubbish? If the 1950s tipping was in the middle of the pond, we reasoned that the earlier stuff must be towards the end nearer the house. They must have started there, filling the pond in, gradually, from the most convenient location and capping the rubbish as they proceeded. So we began digging twenty feet further towards that end and soon came upon a hard layer of rubble capping, the same as before. Underneath it, about five feet down, a black layer of ash began to appear, with rubbish from the 1940s this time. 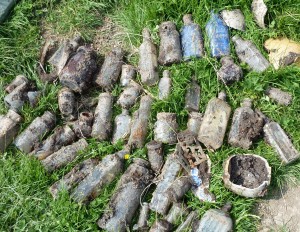 There were Bovril jars with screw-thread lips, embossed Milk of Magnesia bottles (without the trademark found on earlier ones), Californian Syrup of Figs bottles, salad cream, Brylcreem, and numerous paste pots for Shippams and other brands. Mary could remember how her mother would dose her with Milk of Magnesia when she was a girl in the 1930s: – ‘she used to pour it down our throats’. Beneath this layer, we found a few bottles from earlier decades, including ‘Scott’s Emulsion’, a green poison bottle, and Congreve’s Balsamic Elixir (c. 1910) in the mud at the bottom, lying on the chalky natural of the original pond-cut. 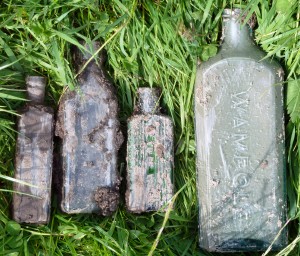 Left-Right: Congreve’s Balsamic elixir, Scott’s Emulsion, a poison bottle embossed ‘Not to be Taken’, and a medicine bottle from the US/Canadian pharmaceutical company, Wampole.

The chalk is visible in the bottom of the trench, below. (The black shelving unit served as a step-ladder for getting out of the hole.) You can see topsoil where the blue plastic bag is, over the greyish capping, above a layer of orangey-brown clay mixed with black rubbish deposits on top of the creamy white natural, all of this in the section. 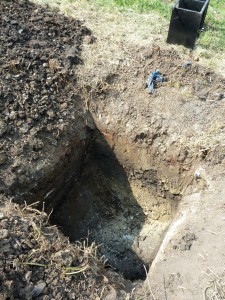 In search of earlier rubbish – for the bulk of the farm’s waste from the 1930s and beforehand still eluded us – we dug another trench where the pond began, but beneath a capping of building rubble similar to that in the other trenches, we found only greenish mud and a few discarded tools. It was clear, therefore, that while a few bottles had been thrown into the pond between c. 1910 and 1945, proper tipping to fill the pond had not begun until about the end of the Second World War. It began, logically, at the end nearest the farm house and progressed towards the middle by 1960. We also solved the mystery of the labourers’ cottage, for although it was demolished in 1910, Mary could remember that walls were still standing; and her father must have used the remaining rubble, once the pond had been filled with rubbish, to cap it all over.

Our search now turned to the site of the vanished cottage, in the hope of finding Victorian rubbish there. Our first trench, behind trees and nettles at one boundary, revealed demolition material and bottle fragments from c. 1910. Our second targeted a privy, shown in the 1886 and 1906 maps. We found the brick platform upon which it had stood, with a minor scattering of nineteenth- and eighteenth-century rubbish around and below it but no big tipping site. 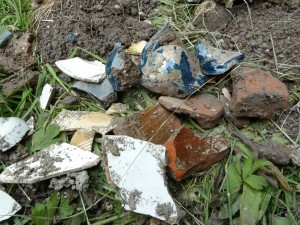 Beneath that was a layer of clay capping, with flecks of brick and charcoal mixed in. Beneath it was a pit with a greyish fill, but it turned out to be a late seventeenth-century midden, containing local earthenware, fragments of salt-glazed stoneware jugs from Frechen in the Rhineland, a few pieces of clay tobacco pipe, oyster shells, and garden rubbish. This midden was directly beneath the platform of the privy shown on the 1886 map, on the boundary ditch of the property, but there was no evidence that it had ever functioned as a cesspit itself – although there was a lot of animal bone (including ribs of beef and pig’s jaws), 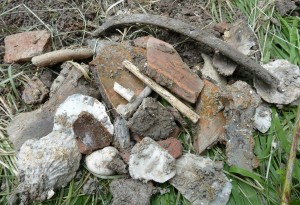 Below you can see the trench in section. The brick and mortar at the top left, along the left hand side of the trench and in the back, is the remains of the foundations of the old clay-walled privy, which would have drained into the ditch (like the privy next door, which the occupant can still remember, it having collapsed several years ago). Below the privy platform is a layer of soil. Beneath that is the orange clay capping laid down over the midden, which is the dark fill underneath, cut into the natural. The trowel is for scale. 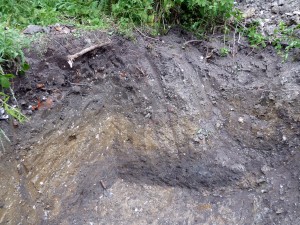 It was interesting to compare what the labourers had discarded in the 1670s – a few broken vessels, bones, oyster shells and no glass (for bottles were rare and expensive at that date) – with what the farmers were throwing away by the 1950s: i.e. hundred of bottles and all sorts of other junk. As described in my book, this transition to a throwaway society began in the last decades of the nineteenth century. So where was all their rubbish from the 1880s-1930s? It must be on the farm somewhere, but our search for clues had run dry. There were no more filled-in ponds or vanished pits shown on the maps, and no obvious patches of nettles or unusual humps left to investigate. No doubt the rubbish had been well hidden, capped at a good depth. Although we failed to find it on this occasion, the search will continue elsewhere!