On Tuesday 24 March, I went with Tom Lucking to investigate a dump in a farmyard at Falkenham, near Felixstowe. The edge of the dump, a black ashy seam containing bottles and crockery, had been exposed the previous summer during operations to widen the pond. By putting in a trench, we hoped to locate the other side of it. 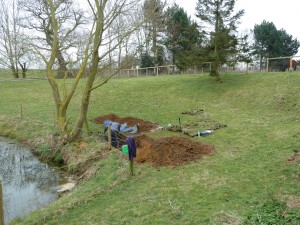 1. Tom puts in the trench.  About three feet down we  hit a layer of crag capping  which had been used to seal  the dump.  Beneath it was a  thick layer of black ash and rubbish, the top of it sitting  level with the water table.  It lay in a depression in the  pit of a redundant coprolite quarry. Beneath the black layer was a layer of green/grey sludge, which we interpreted as the bottom of a filled-in pond. The pond in the photo had been dug at a later date. 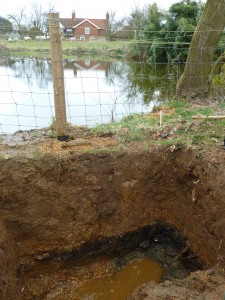 2. A dark fill under the crag capping.

Various pieces soon began to emerge from the black layer, including the bottom of a candlestick, broken cups and plates, a sauce bottle, a bottle of ‘Varalettes’ (effervescent tablets for curing gout), and a broken ceramic jelly mould. It was evident, however, that the thicker part of the seam lay where the pond cut was bellying out. We therefore extended the trench in that direction. 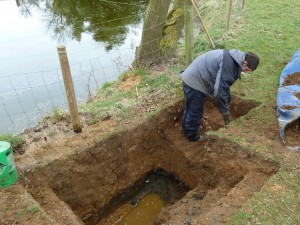 Soon we were down onto the dark layer again, uncovering stoneware ink bottles, more crockery, Bovril bottles and the like. Nothing that could have been re-used had gone into that layer of rubbish. It contained no wine or ginger beer bottles or useful jars, only worn, low-grade material, some of it heavily used with much of the crockery showing crazing and wear. A few possible exceptions were three pieces of cheap Chinoiserie and the occasional vase or respectable teapot. But these may have been rejected on account of taste or damage. 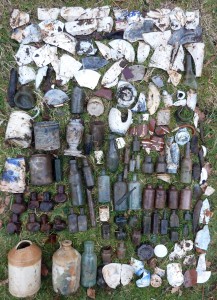 4. Material from the layer of rubbish.

Rather than showing the profile of the  normal cycle of waste and breakages,  this was a clearance assemblage. The  material had been sorted. Everything  desirable had been removed, and the  remainder had been carted over to fill  the old pond. The even consistency of  the dark layer – a single context – and  the presence of fragments of the same broken objects throughout that layer  showed that the rubbish had all been dumped in one event. Perfume bottles and a few other clues linked it to a woman, but there was nothing to indicate children. We also hypothesized that the large number of old and worn items pointed to an older woman and probably to a clear-out event following her death. 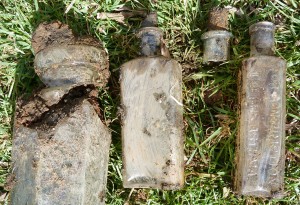 5. Vessels with corks and/or contents still inside. A large number of these in a dump may be evidence of a clear- out. Left to right: a piccalilli jar and three medicines: the one on the right contained a favourite remedy for chest complaints, Congreve’s Balsamic elixir. 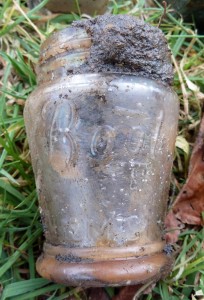 6. A jar for cream or cosmetics, sold by  Boots Cash Chemists, discarded with lid  and contents – one of only two vessels  possessing external screw-thread lips.

The rubbish could be dated to the later 1900s by a range of diagnostic features and objects. Two worth mentioning are the total absence of bottles made in the new automatic bottle machines, and an absence of ‘Foster Clark Ltd’ bottles. All the bottles from that firm bore the name of Foster Clark and Co (used until 1910), but they did include short-necked specimens as well as long-necked ones. The short-necked type was superseding the long-necked type in the years before 1910.

On Wednesday we extended the trench again and found that the fill of the old pond extended at least 12 feet in width, the seam about 2 feet at its deepest. Large corroding metal items and wooden objects confirmed the impression that this had been a thorough clear-out.

7. Tom prepares to bail water out of the extended trench. 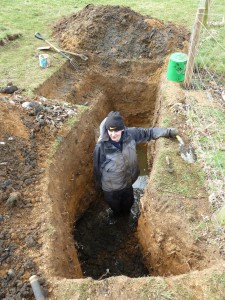 Although we knew nothing about the occupants of the farmhouse, we were able to link the dump to a particular event by subsequent archival work. From the 1870s, the tenants in that house were John and Mary Everett, farmers, their several children, and a few servants. After John Everett died in 1899, aged 61, his widow became the head of a reduced household until her death in October 1908, aged 67, leaving her two unmarried daughters both in their late 30s, and a solitary female servant. The daughters, Kate and Emma, were resident in 1911 still, but were gone by 1913 when the owner of the property (Mary Dains) died, and the whole estate was sold to Cobbold & Co, the Suffolk brewers. Since the rubbish could only have come from that household, it can be linked with confidence to death of Mary Everett, an event prompting her daughters to sort through their mother’s things and clear out objects that she had accumulated. 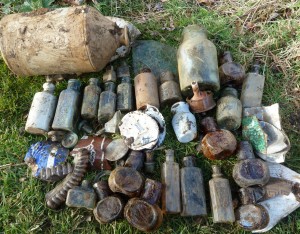 Some of those objects might have been sitting around in cupboards for years. Others could have been purchased as late as 1908, including a few bottles and jars emptied by the sisters and discarded during the clear-out. All in all, however, the deposit is very useful: for though it does not offer a complete picture of what was in Mary Everett’s kitchen and pantry, it does provide a large assemblage of items that were deliberately discarded, and were in use before the end of 1908. 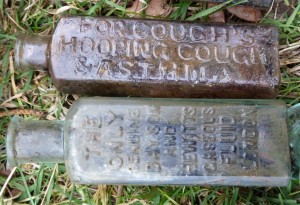 9. A variant bottle for Congreve’s balsamic elixir, for coughs, whooping cough, and asthma. The other bottle (below) contained Day, Son and Hewitt’s gaseous fluid, for curing colic in horses and scour in sheep.