R. White & Sons Ltd had their main factory in Camberwell, South London, and sold their carbonated beverages (chiefly lemonade and ginger beer) in Codd bottles, stoneware bottles and glass corked/ internal-screw stoppered bottles. In the late 1880s, no deposit was...

Green glass, machine-made, internal-screw beer bottle, embossed with the name of Bidwell’s, Thetford. Found with rubbish from the 1920s at Holme Hale Hall. 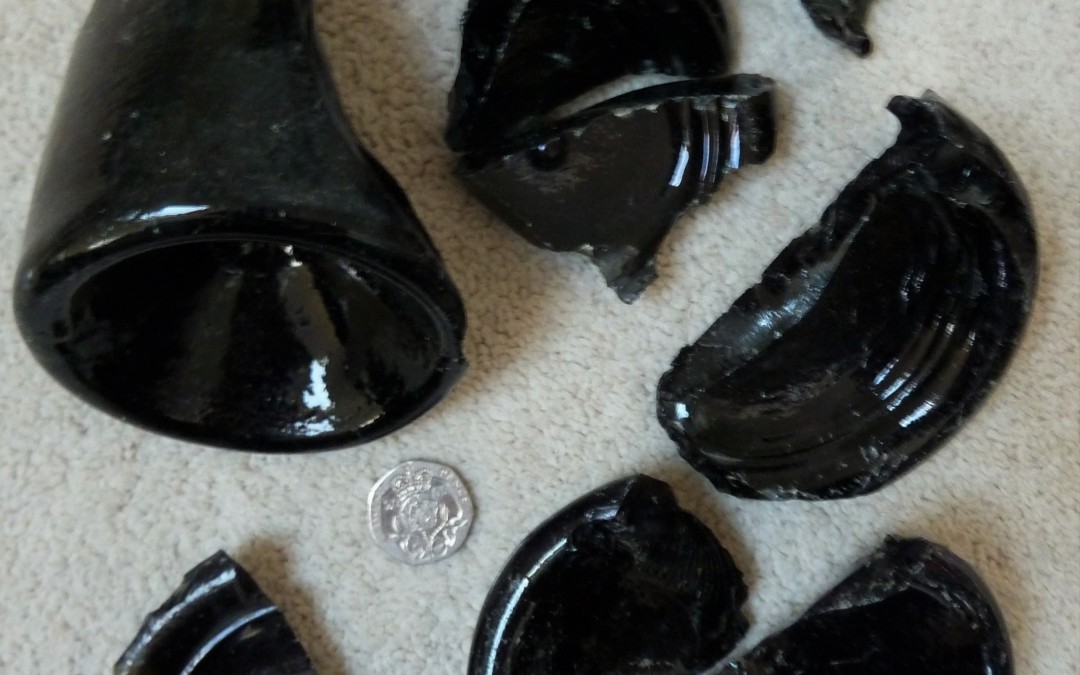 Bases of black glass bottles for wine, ale or beer. Such bottles were discarded only when broken. Found in a midden dating to the 1840s at Brockdish rectory.

Black glass necks from bottles for wine, ale or beer, found in an 1840s midden, Brockdish rectory. Such bottles were re-usable and were discarded only when broken.

Cork-top half-pint beer bottles, for the Yates Bros, Wisbech (left) and Peatling and Son of King’s Lynn and Wisbech (right). Both show wear patterns suggesting a good deal of re-use. 1900s-1910s. Discarded in the 1920s.

A green glass bottle for wine or beer with a crudely rolled applied lip. Found amid hardcore that had been steamrollered as the foundations of a track-way into the ash-yard. The cork remains, 1880s or earlier.

Cox’s beer bottle, rear embossing: a farthing’s deposit charged on this bottle. The farthing (a quarter of a penny) would be given to the customer when the bottle was returned to the shop.

Amber beer bottle for Cox’s of Southend-on-Sea, bearing the trademark of J. F. Harrington. Internal screw stopper. A farthing deposit charged on this bottle. Found below the sea wall,

Black glass beer bottle for Seabrooke and Sons of Grays and Thurrock. Cork top. Found below the sea wall at Burnham-on-Crouch.

Beer bottle for W. W. Humphreys of Shrewsbury. It would have taken a cork.