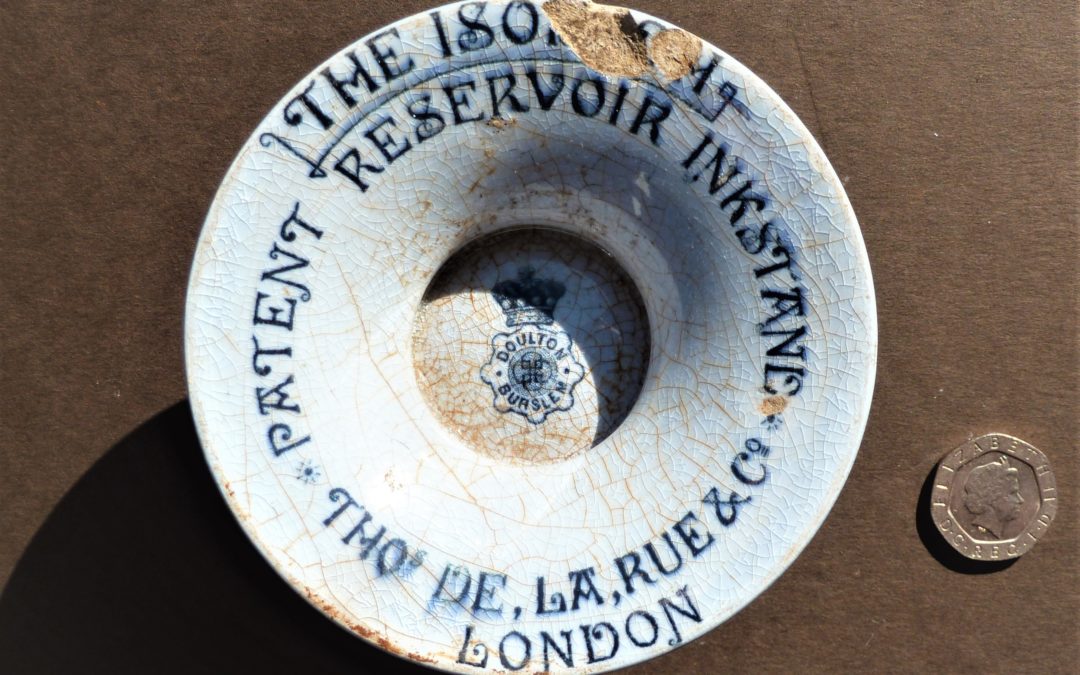 Base of an ‘Isobath’ patent reservoir inkstand, made by Doulton for the De La Rue company of London, who also designed fountain pens. This is the base of a pedestal foot, rising into a bowl (the bottom of the inkstand), and broken off at that point. The... 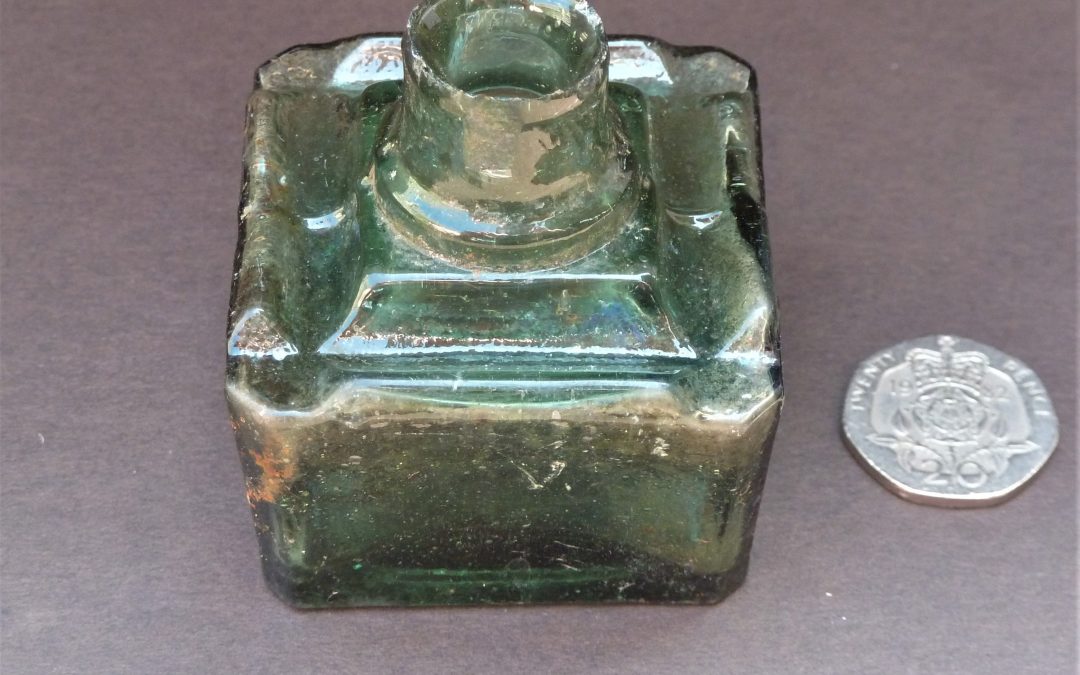 Greenish glass, square ink bottle, with four pen-rests moulded into the top, and with a burst-off lip for a tight-fitting cork held in place with wax. Bottles of ink of this size cost a penny and were widely available. 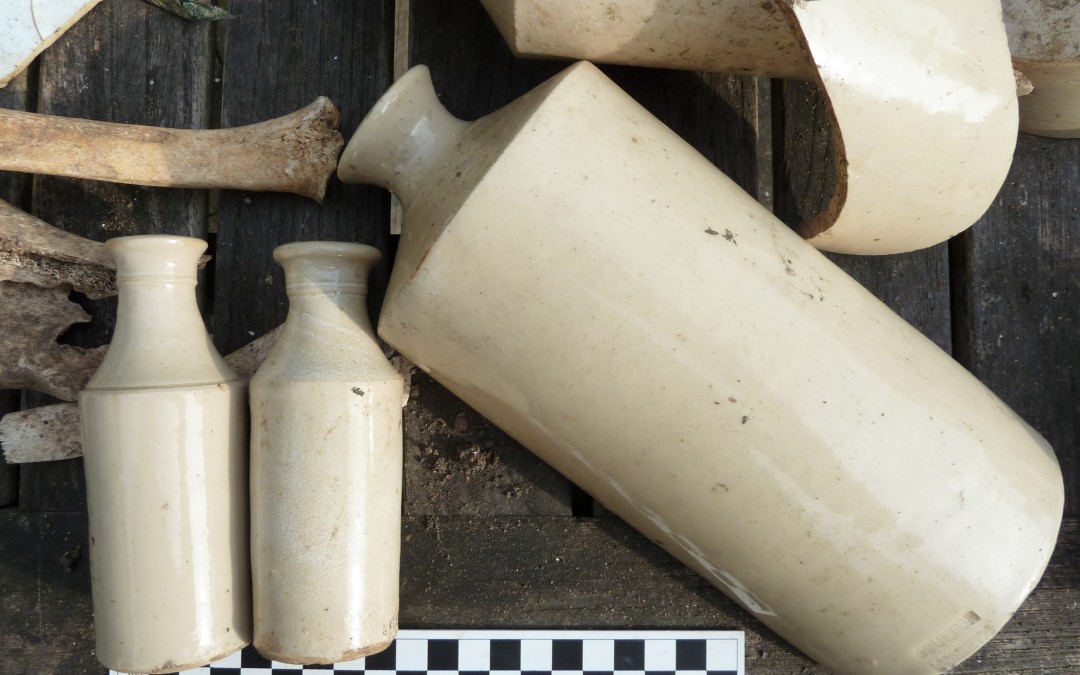 Large and small cream stoneware ink bottles. The two on the left may have contained ticket or label ink. The large one was a master ink, made by Doulton, Lambeth (stamped bottom right). It was found to be broken but seems to have been discarded intact. The scale is in... 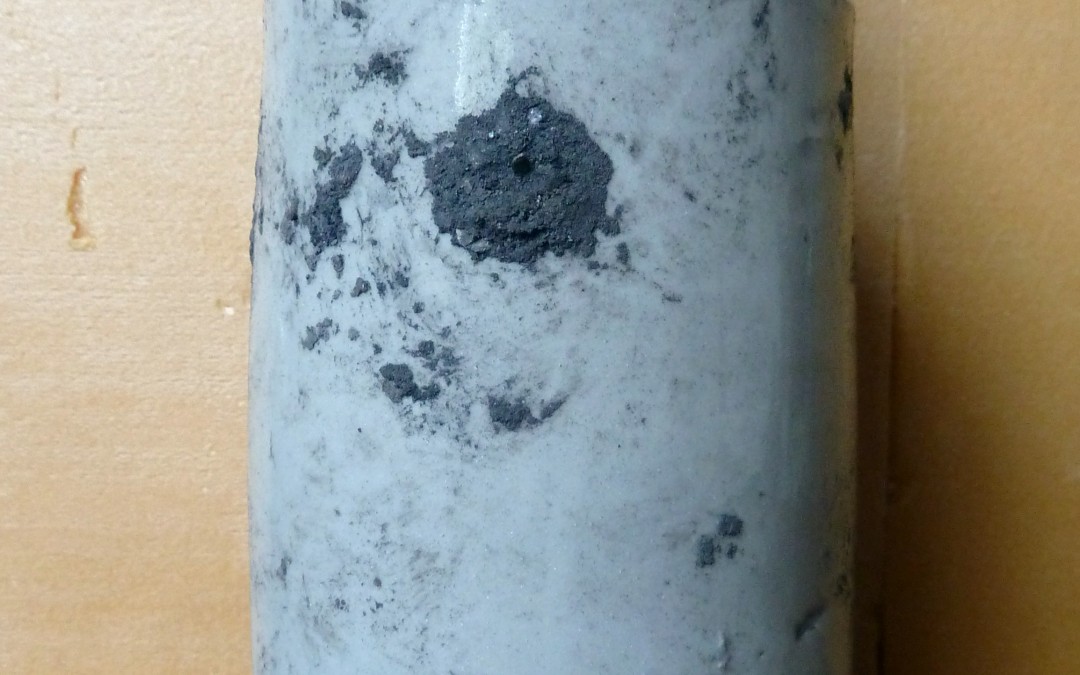 Cream/ white ink bottle with a pouring lip, impressed on one side ‘Field/ London’, and on the other with a stamp of J, Bourne & Son of the Denby Potteries near Derby. The item is shown prior to cleaning. 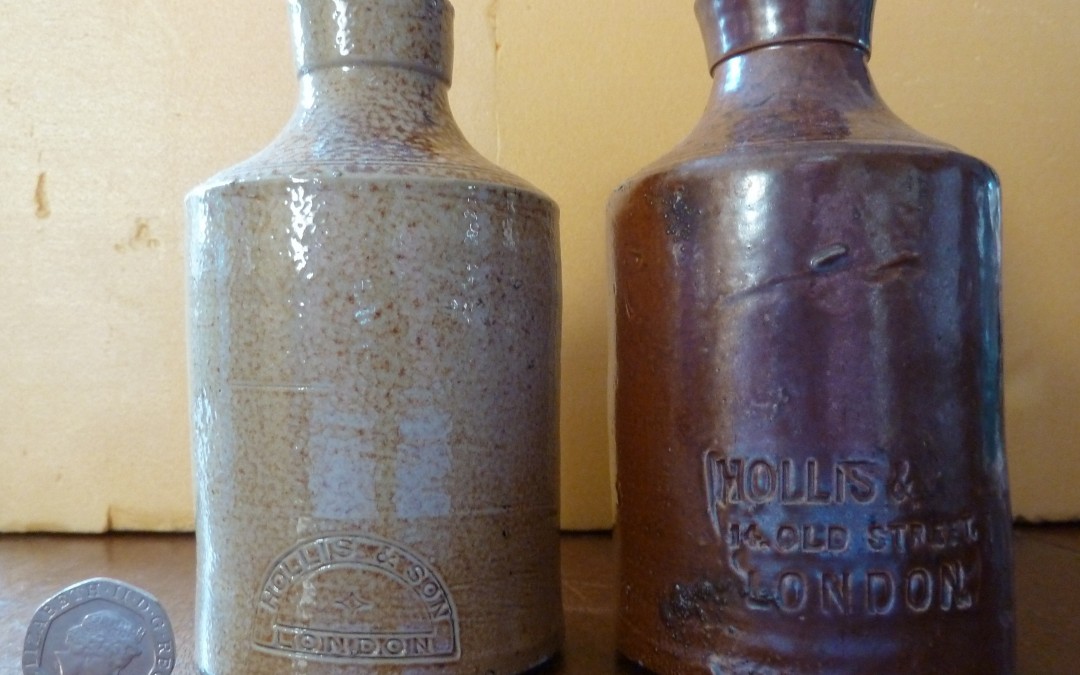 Stoneware ink bottles for the firm Hollis & Son, of 14 Old Street London. The bottle on the left has a salt glaze, that on the right a thick brown liquid glaze. 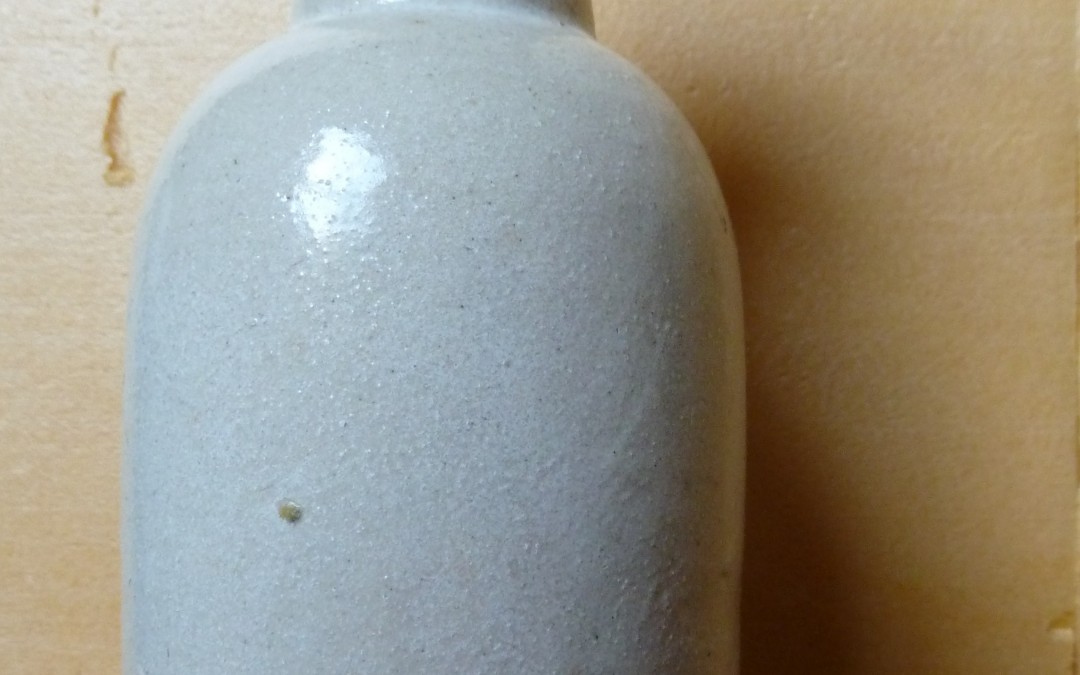 Blackwood’s Patent Syphon ink bottle, with distinctive pouring lip and hole to rear of neck. Fragmentary bottles of this and the larger size were also found amid rubbish from the early 1880s. 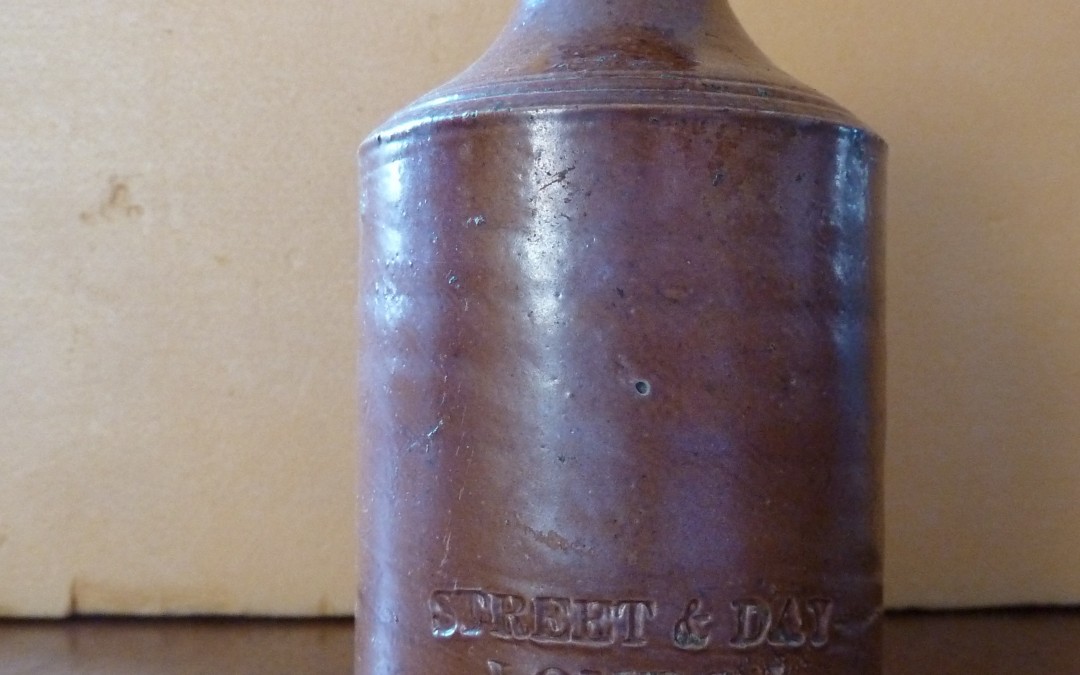 Stoneware ink bottle for the firm Street & Day, of London. 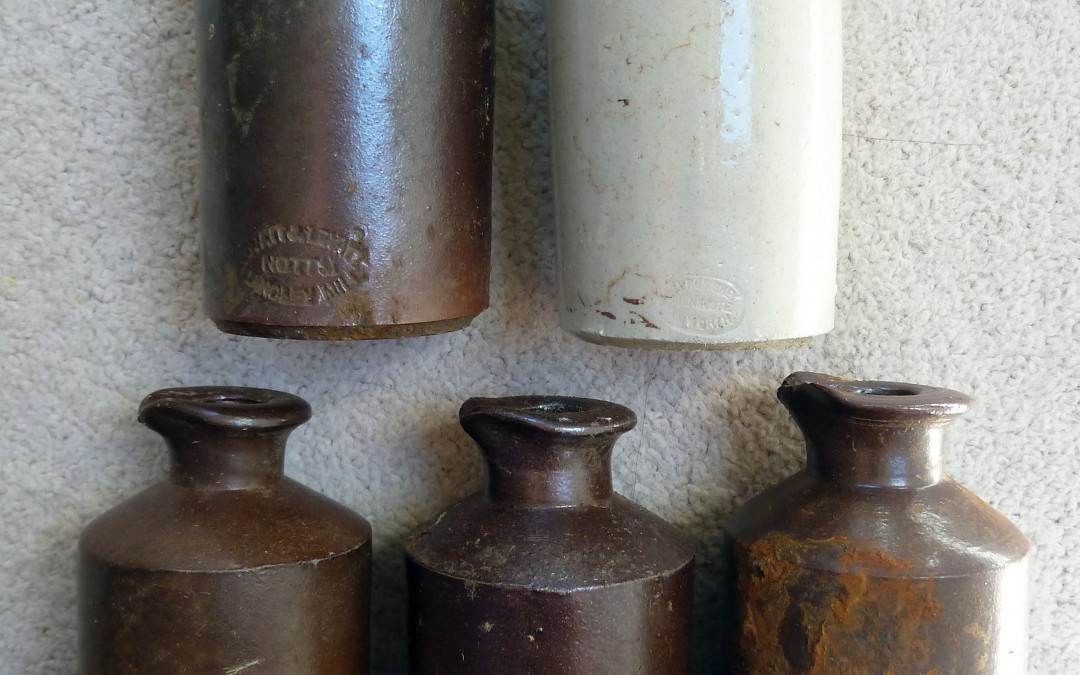 Stoneware ink bottles. The brown ones are 11.5 cm tall (with slight variation) and were made after 1895 by Lovatt & Lovatt, Langley Mill, Nottingham. They are not as well made as earlier ink bottles by firms such as Doulton, who trade Lovatt and Lovatt and others... 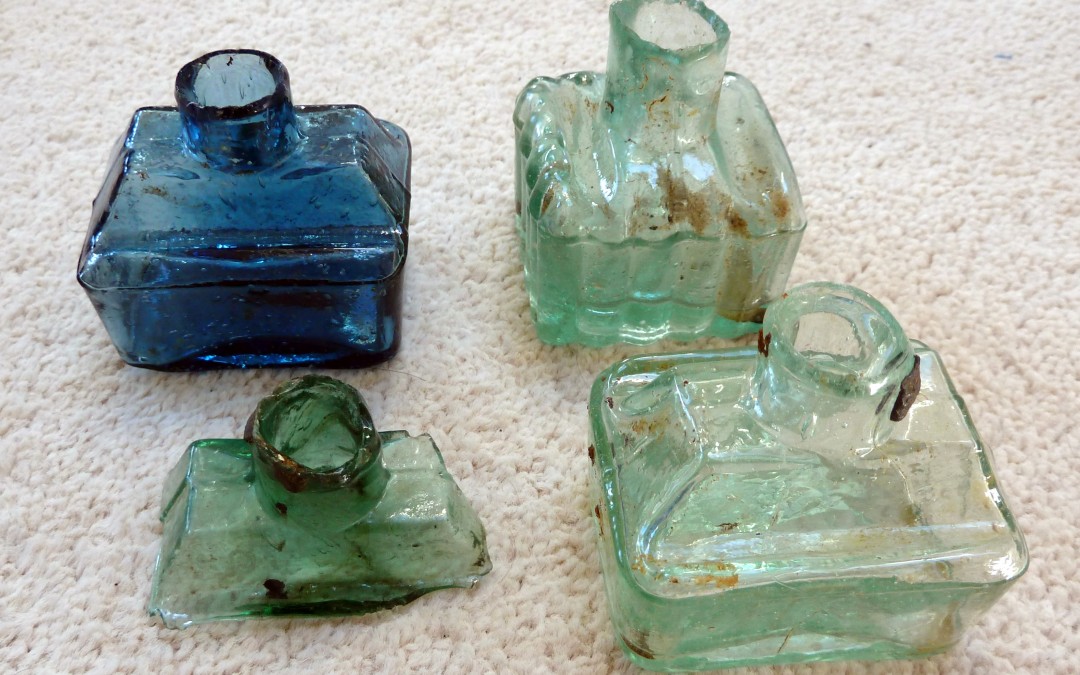 Ink bottles, in different colours, with recesses in the shoulders for pens to rest, and with burst-off lips. The two in the front row still retained some of the sealing wax, used to secure the cork, around the lip. The broken green one, front left, is embossed... 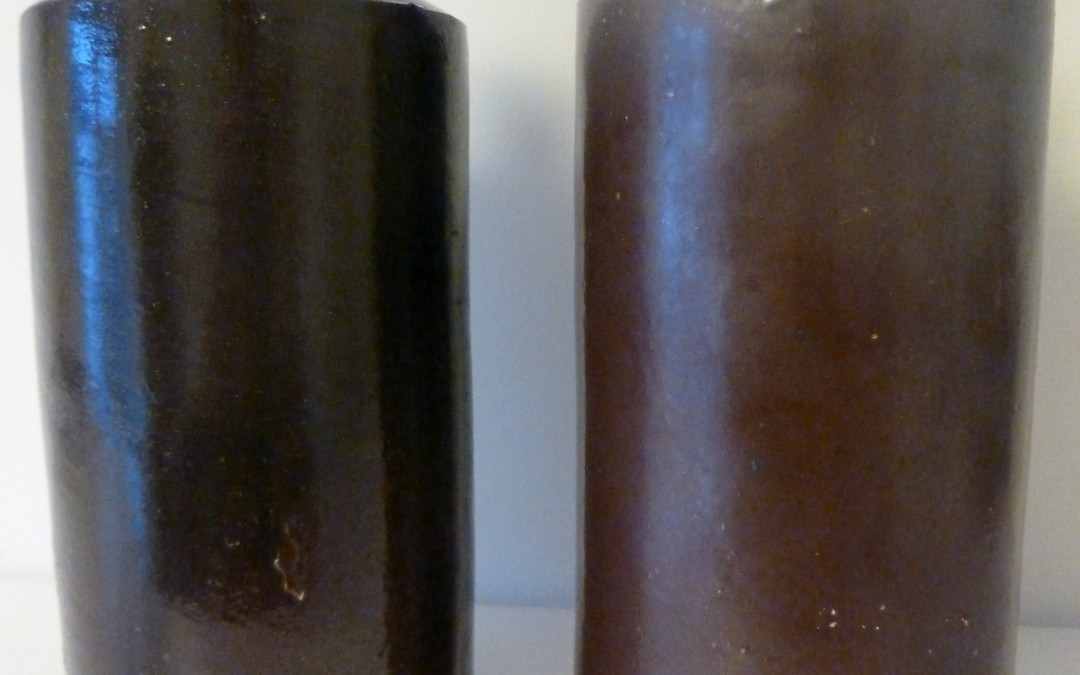 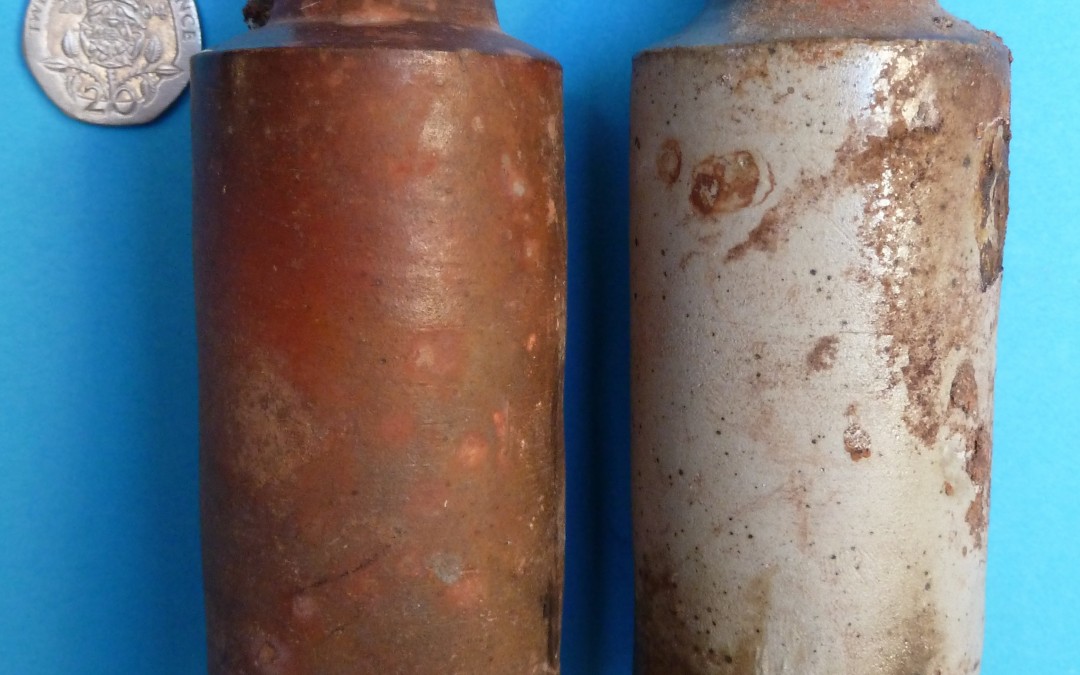 Ink Bottles from a Destructor

Two ceramic bottles for ink or dye which have been in a destructor in London. Dumped as hardcore to build a road surface in Essex. 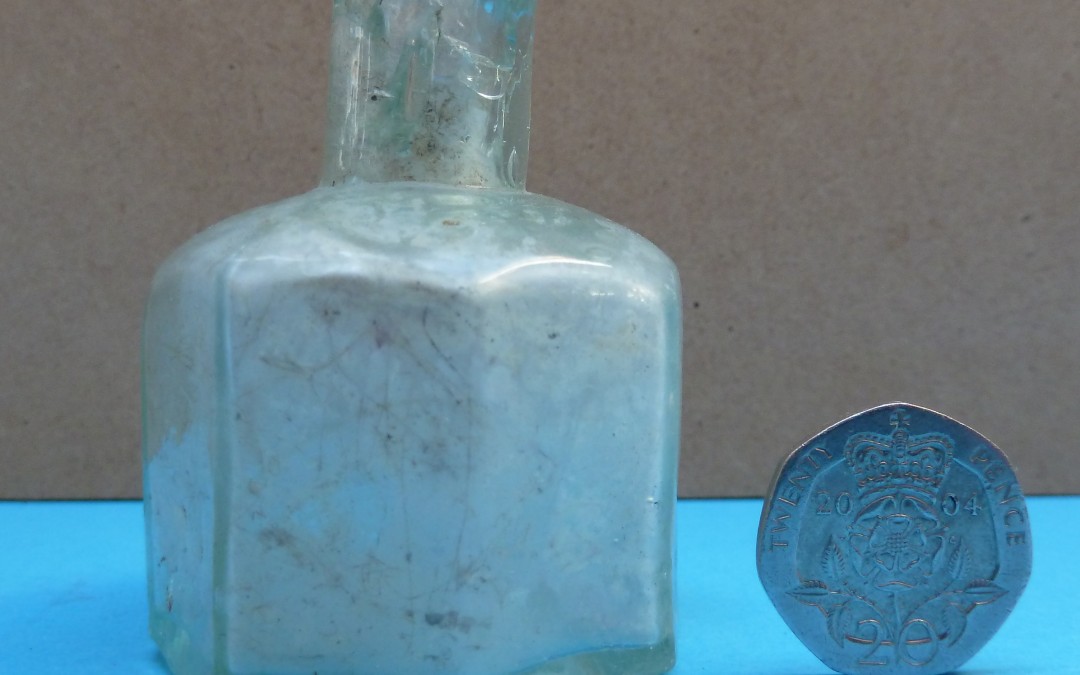 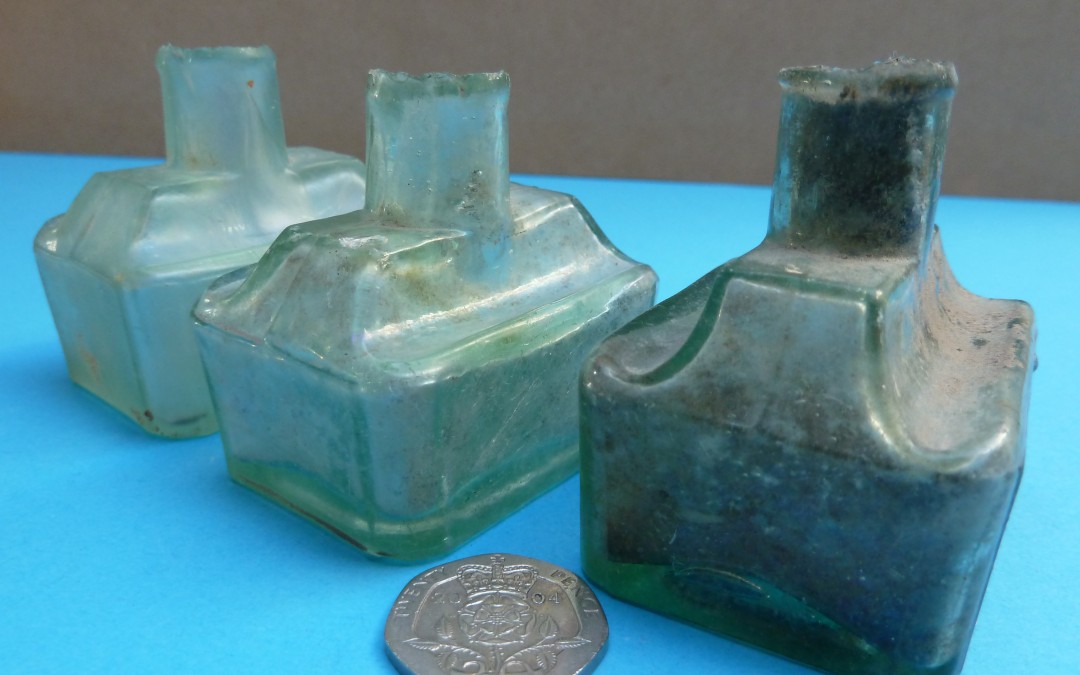 Aqua boat inks with burst-off lips. The recesses in the shoulder were for resting the pen. These came with corks sealed with sealing wax, and sold for a penny each. The one on the right is still full of river mud. 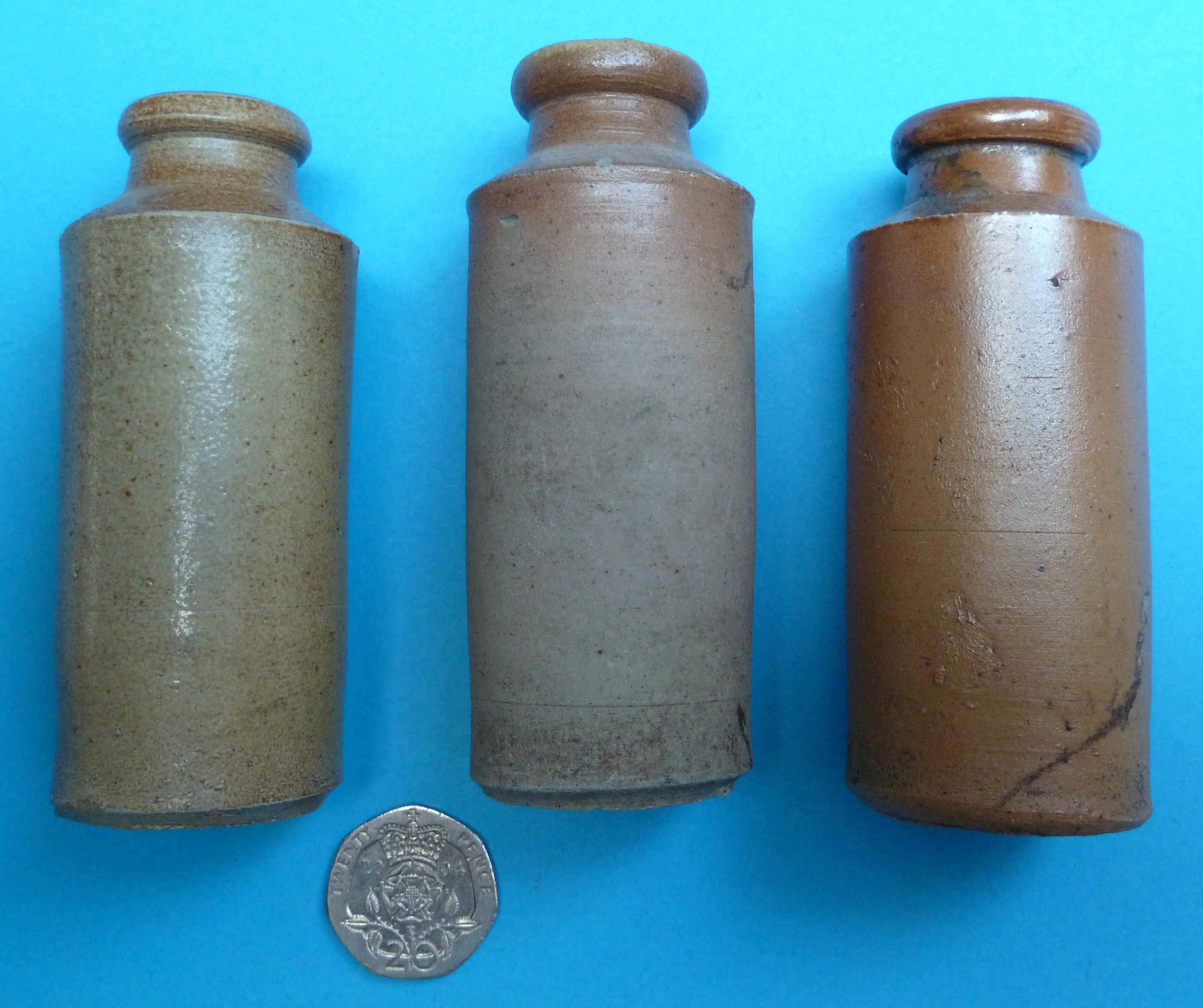 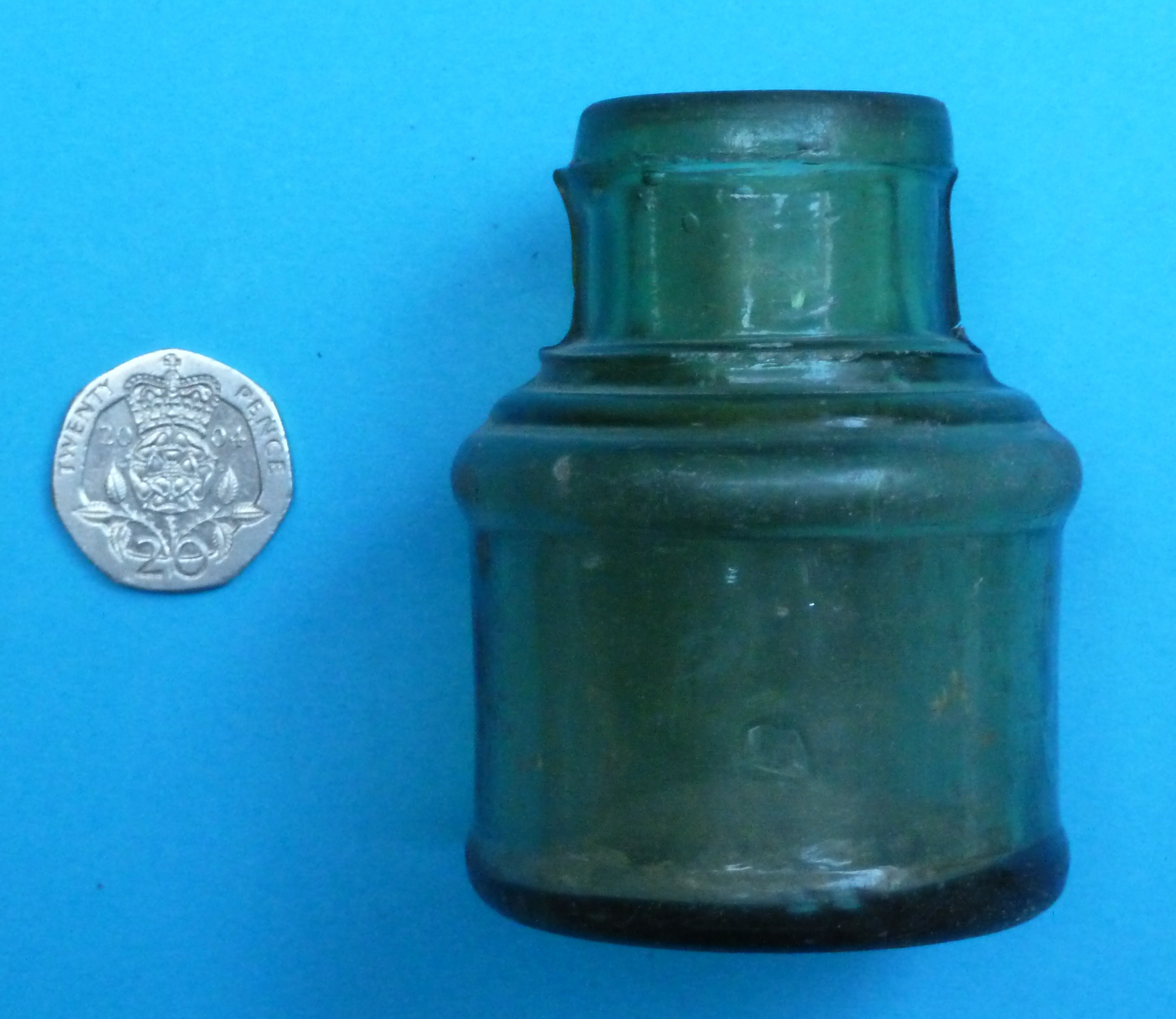 Greenish/ turquoise ink bottle. These are commonly found in rubbish dumps from the 1910s. 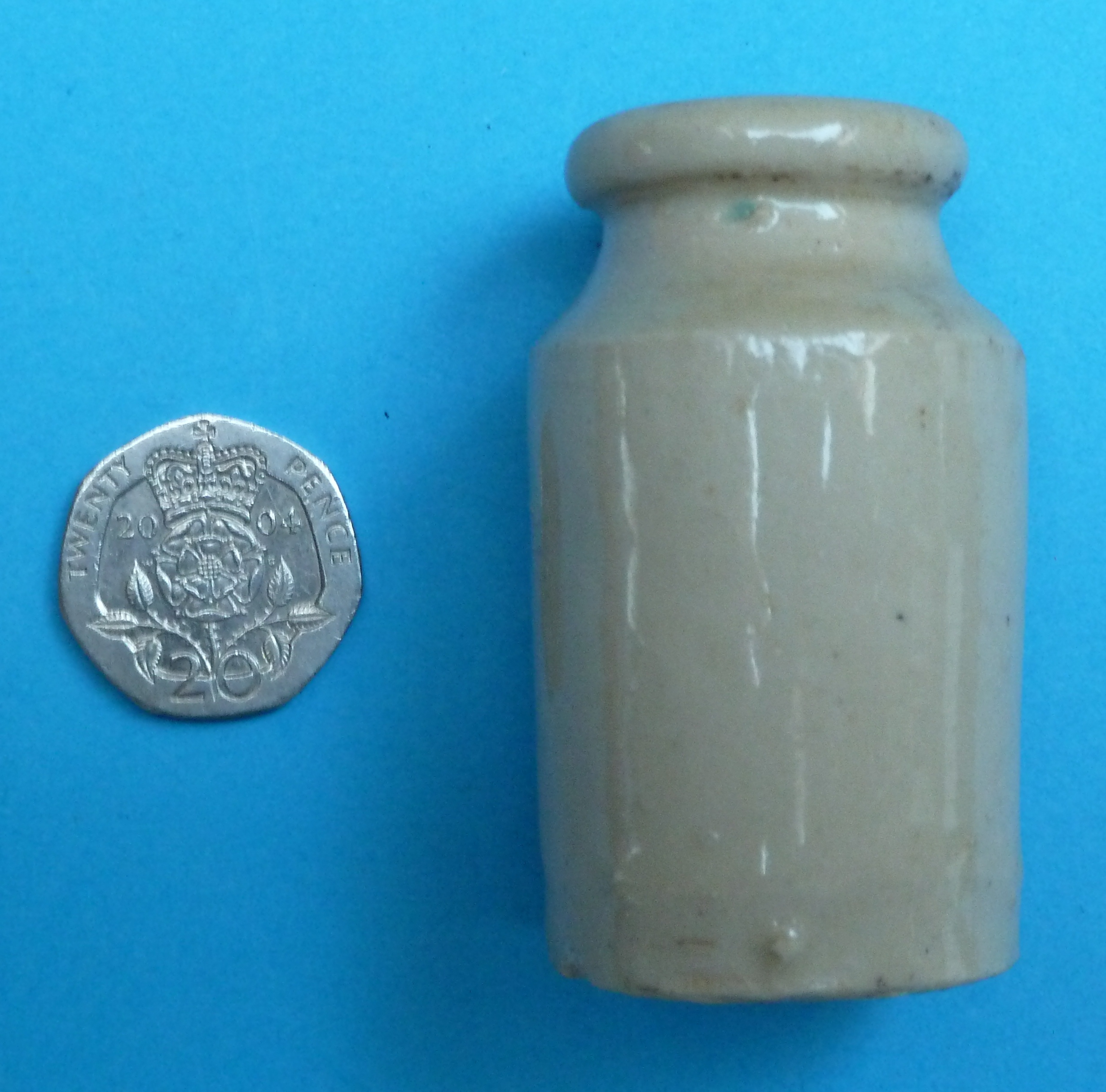 These were corked, sealed with sealing wax, and cost a penny each. They contained writing ink. 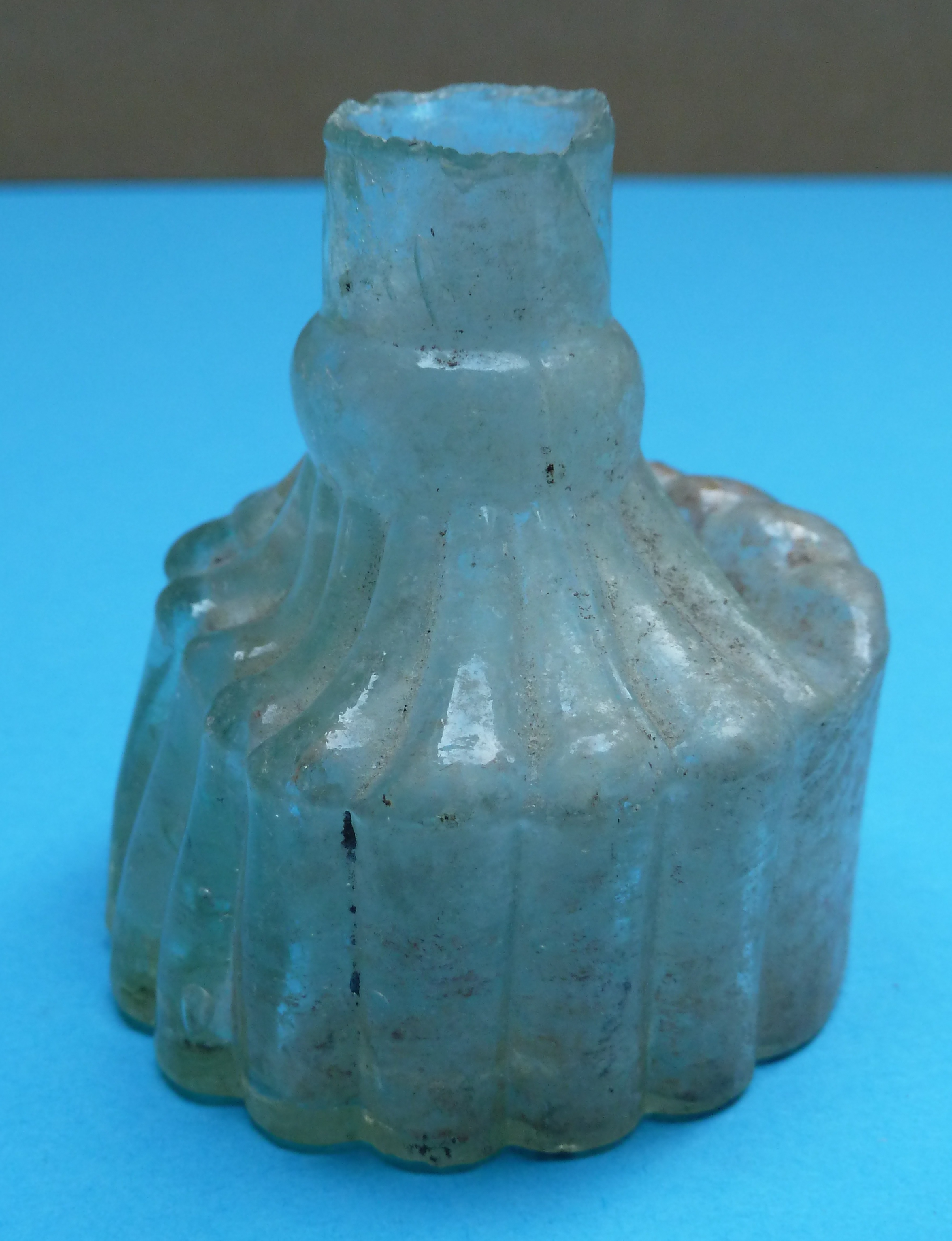 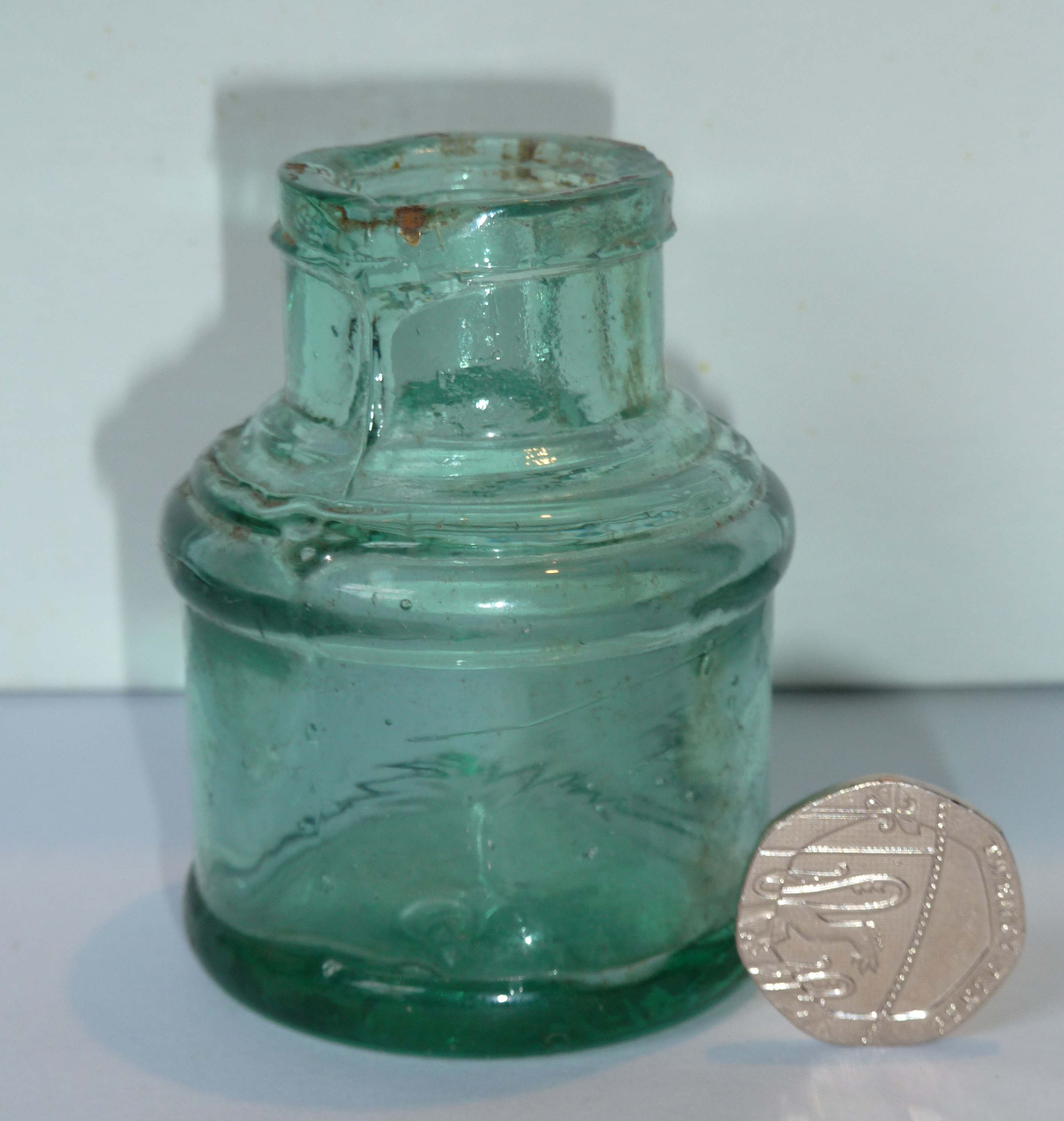 Green inks of this sort are common on sites dating after c. 1910. 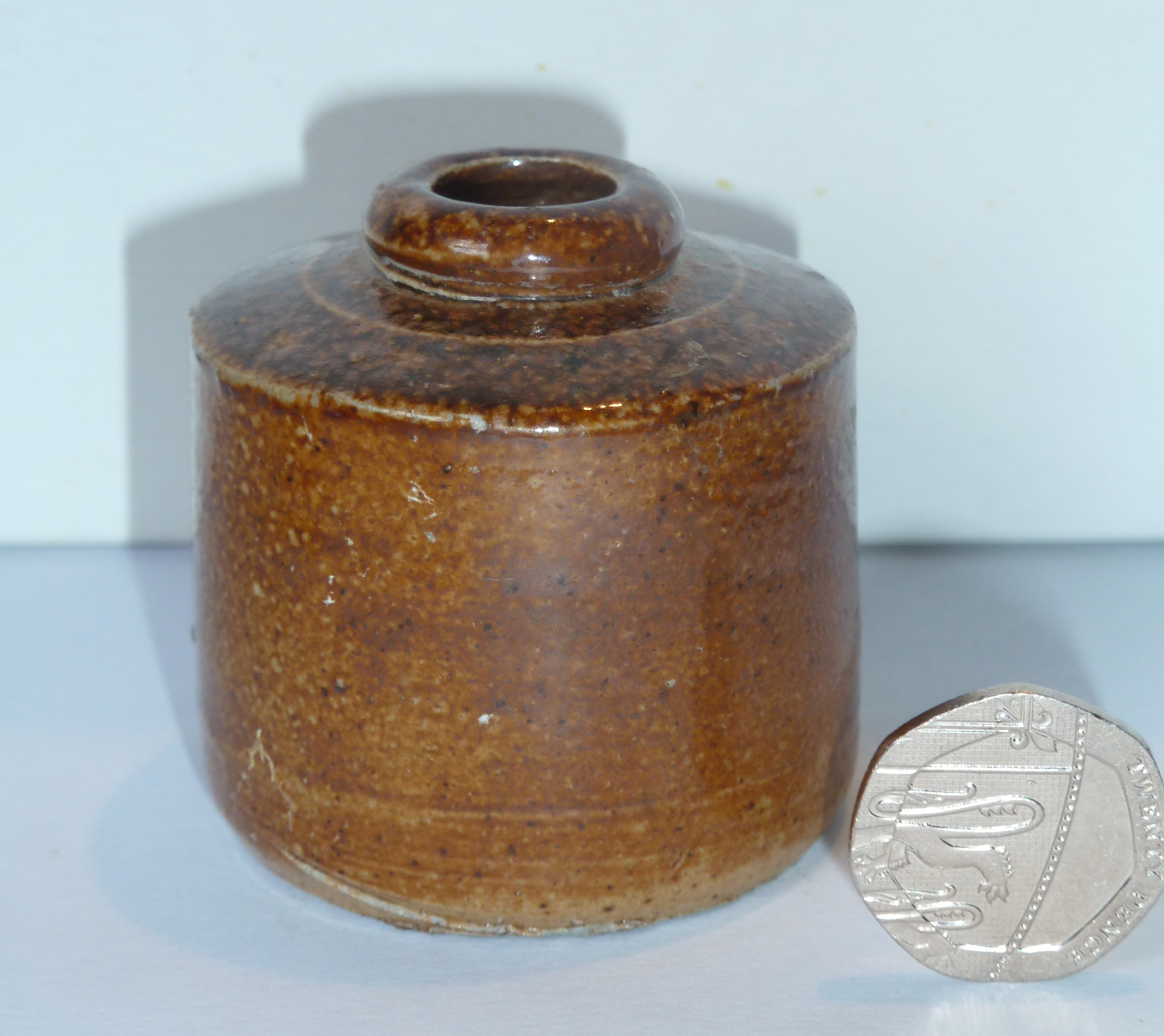 Stoneware ink. These sold for a penny.
« Older Entries