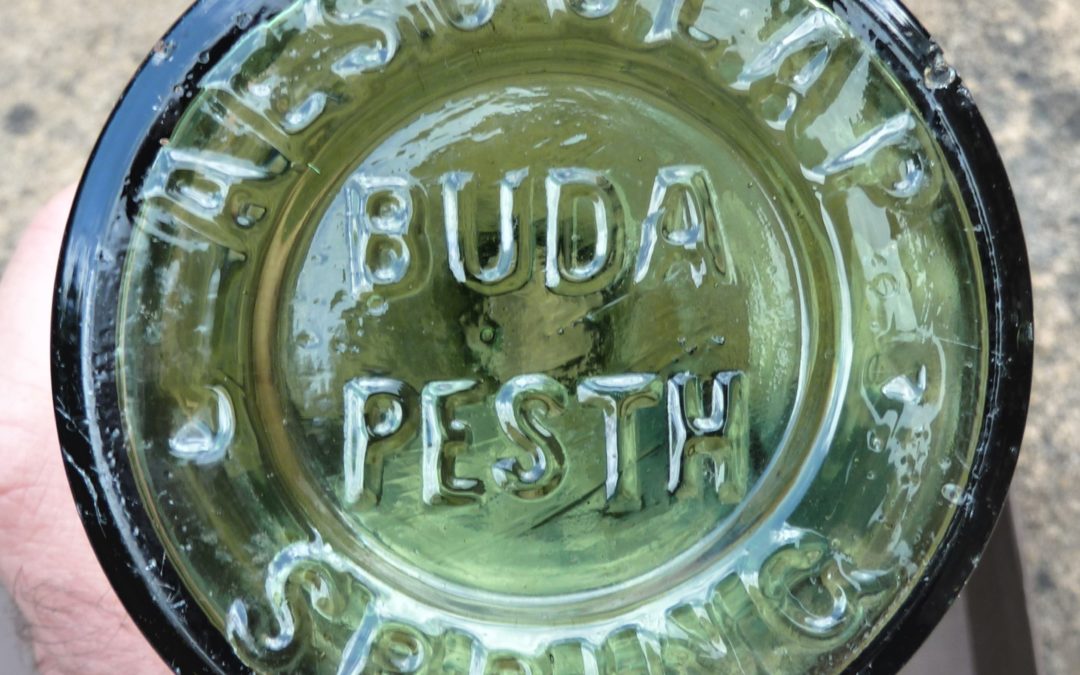 Light green glass mineral water bottle for the water called ‘AEsculap, from a spring in Budapest. Part of the label, bearing the name, remains. T.D. Luke and N.H. Forbes, in their manual ‘Natural Therapy’ (Bristol, 1913), p. 284 list this brand under... 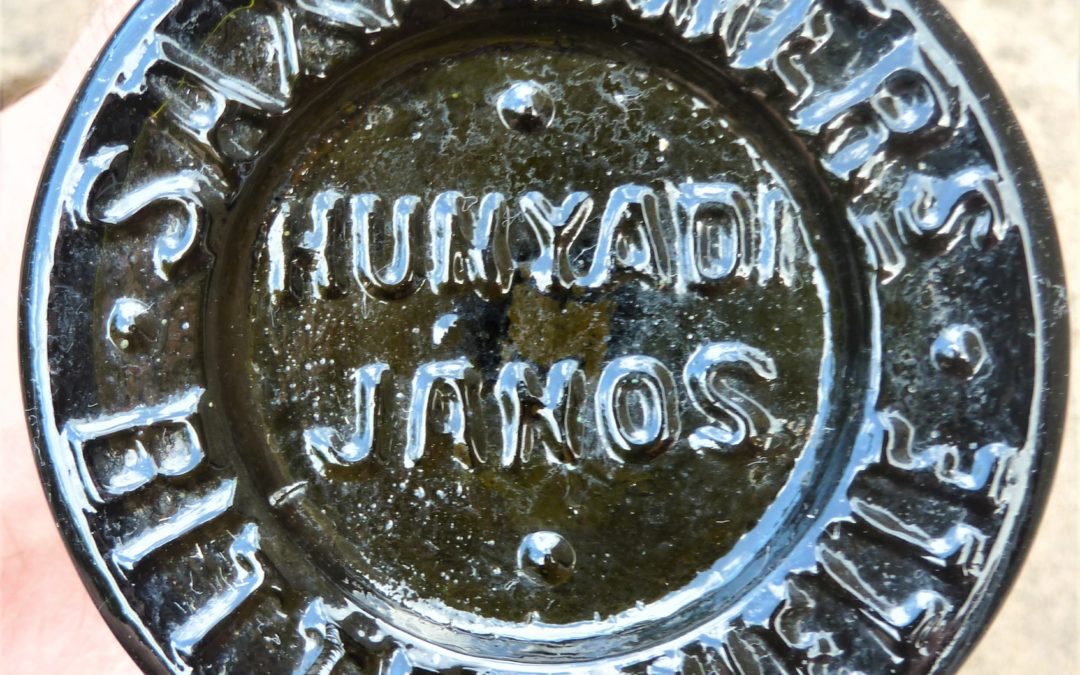 Dark green glass bottle for mineral water. The brand, called ‘Hunyadi Janos’ after a medieval Hungarian hero, was marketed by Andreas Saxlehner of Budapest as an ‘aperient water’, recommended for combating constipation. The spring was near... 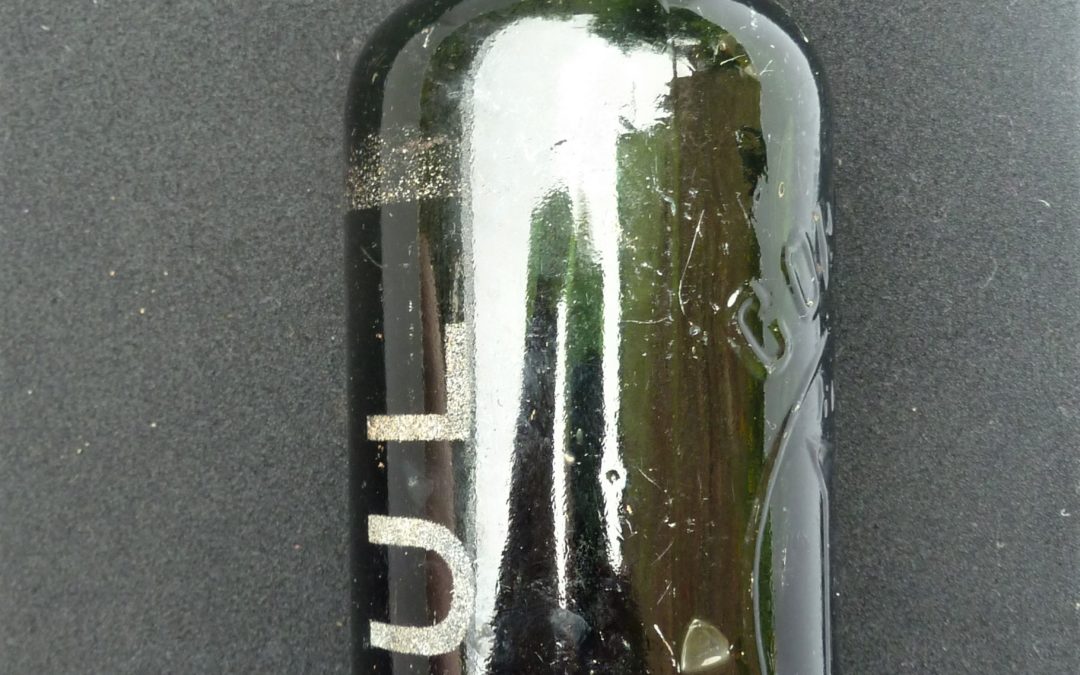 Green internal screw mineral water bottle originally made for the Cohen Brothers of Camberwell before the dissolution of their partnership at the end of 1892. The bankrupt stock of bottles was purchased by the firm of Nicholas Paul (St Pancras) and sand-blasted with... 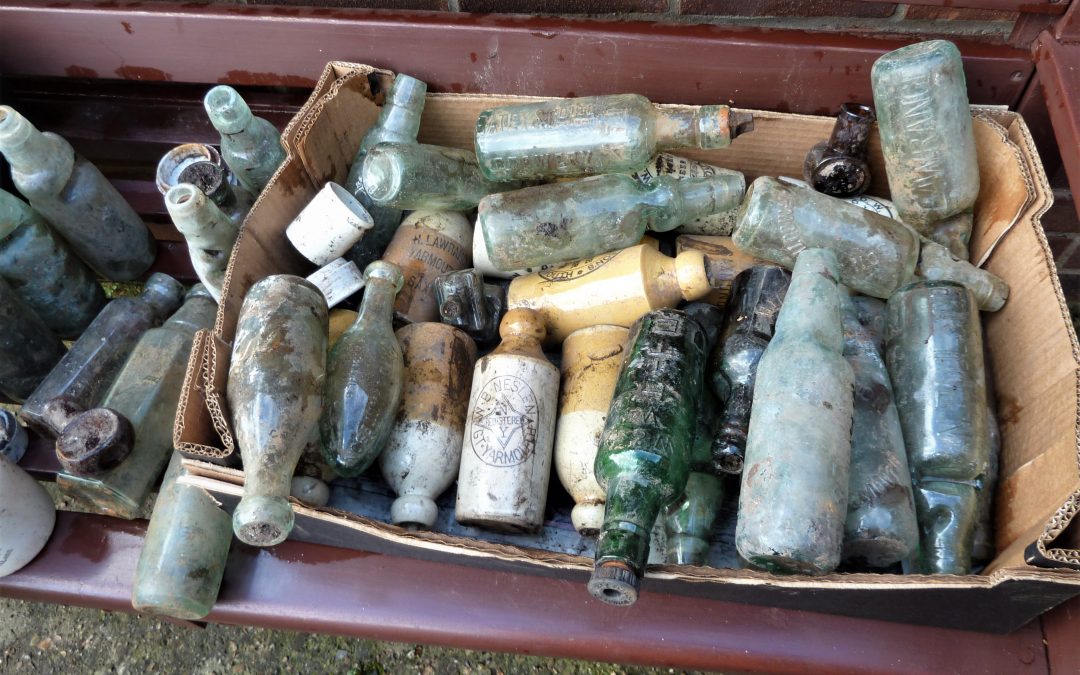 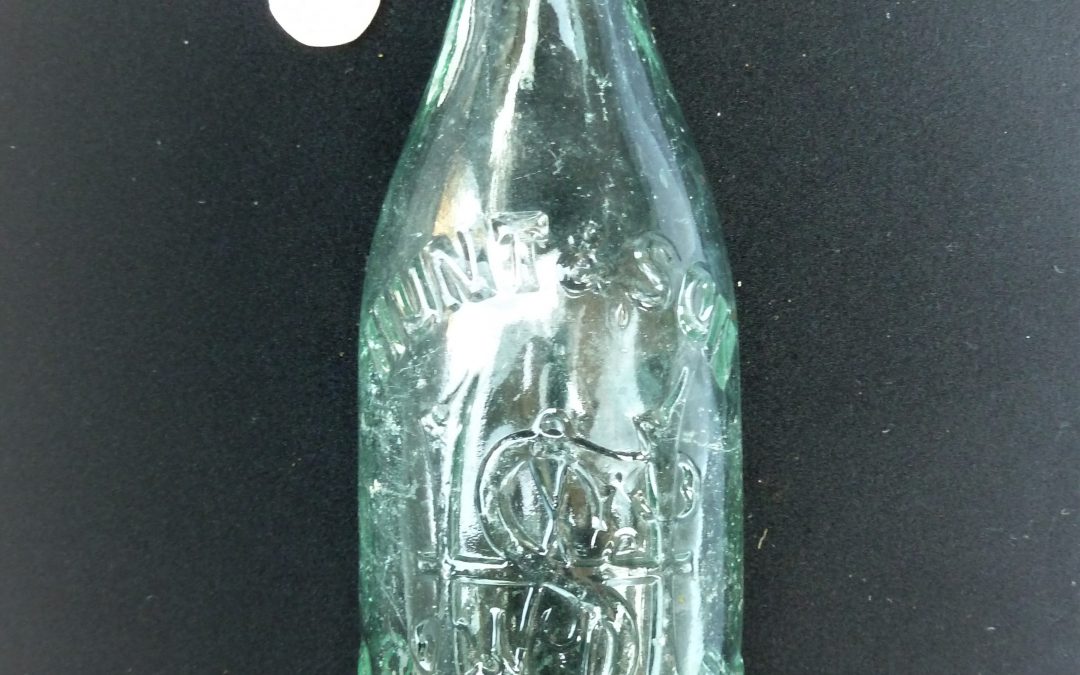 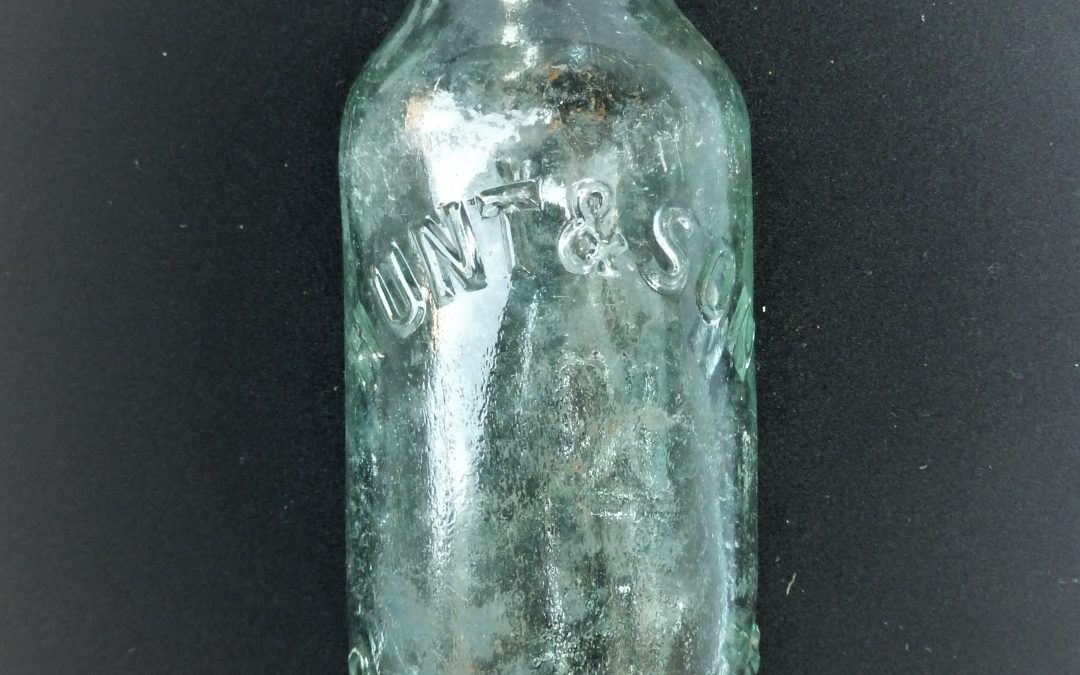 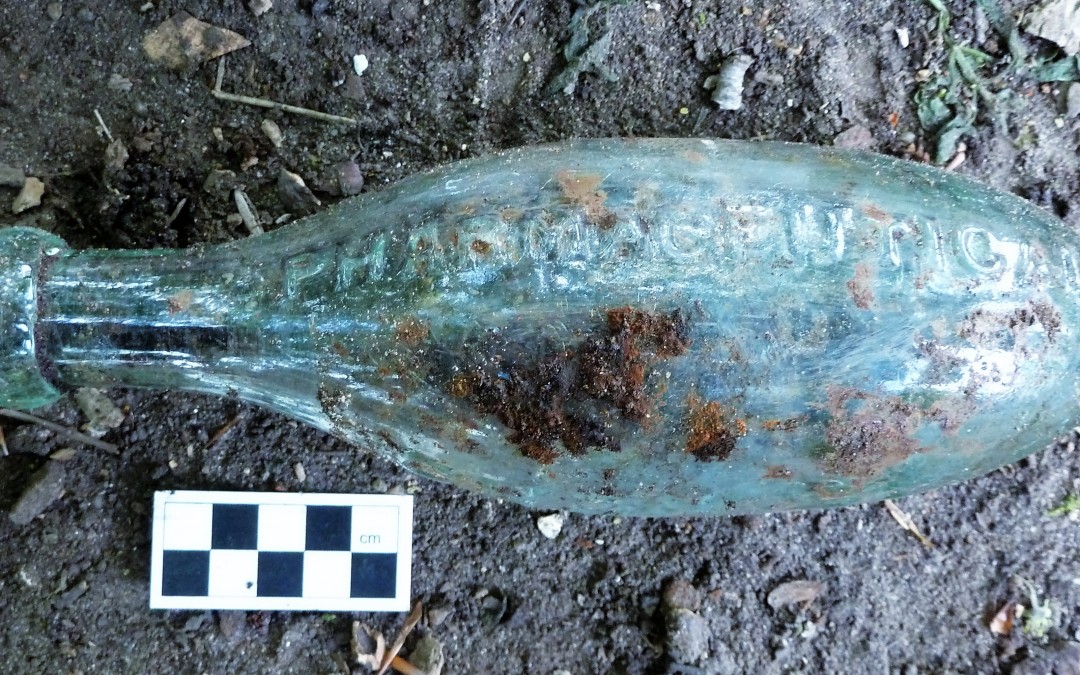 A nineteenth-century mineral water bottle, embossed with the name of Caley’s Pharmaceutical Works, Norwich, dating before 1898 and discarded in the 1920s at Holme Hale Hall. 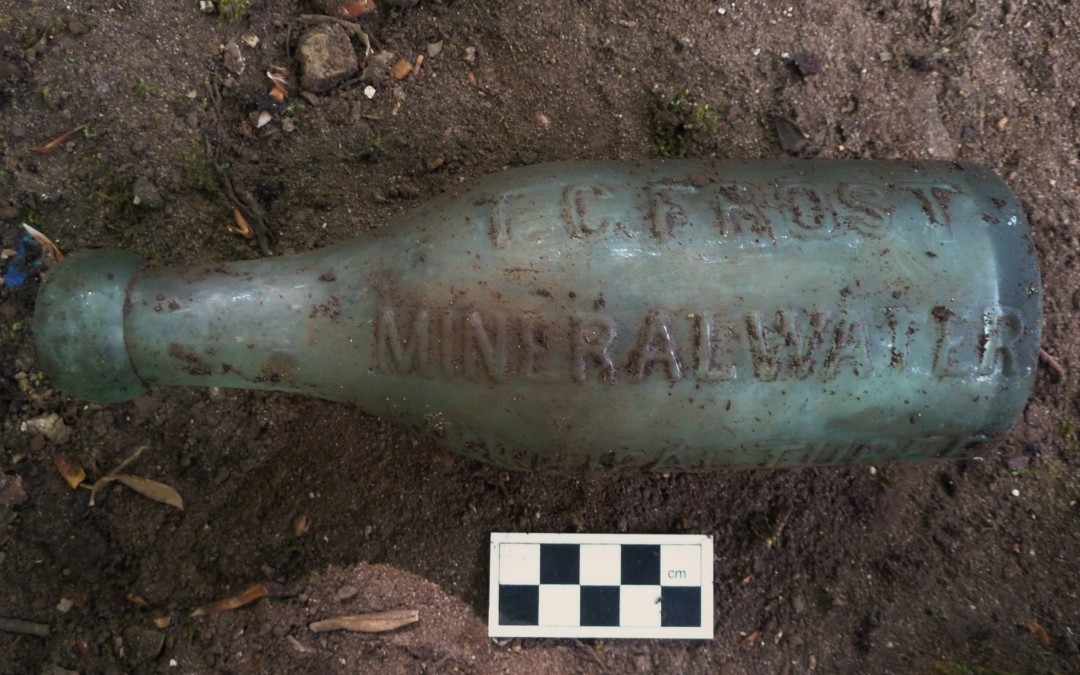 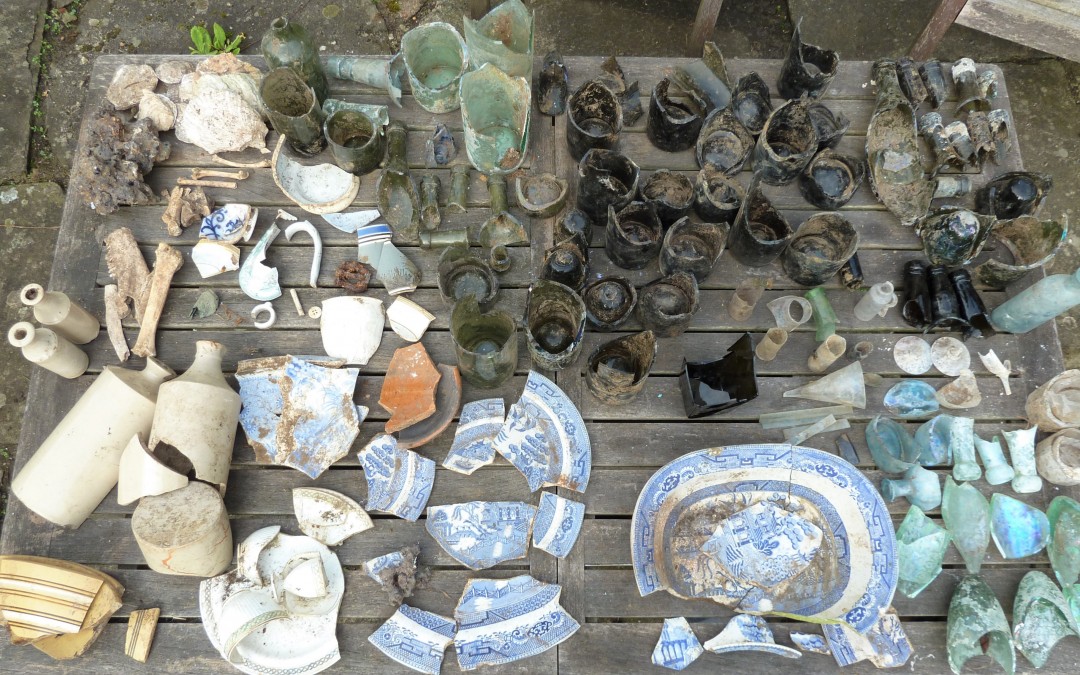 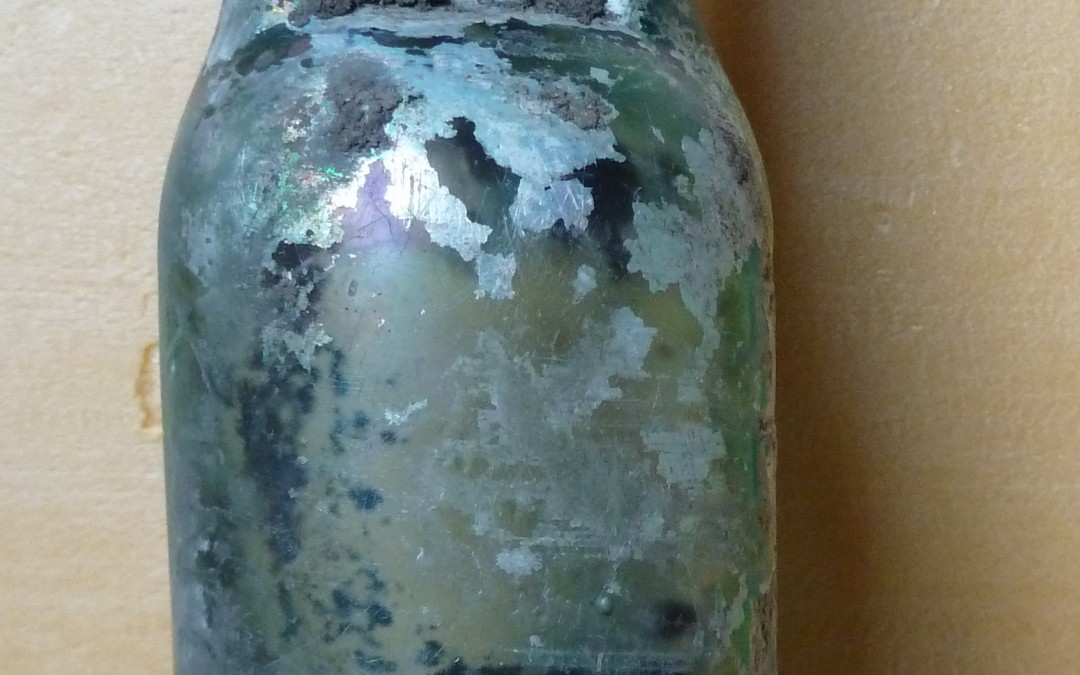 Early narrow-necked Codd bottle, datable to the 1870s, from the firm E. Eyre & Co of King’s Lynn. The photo shows the bottle before cleaning. 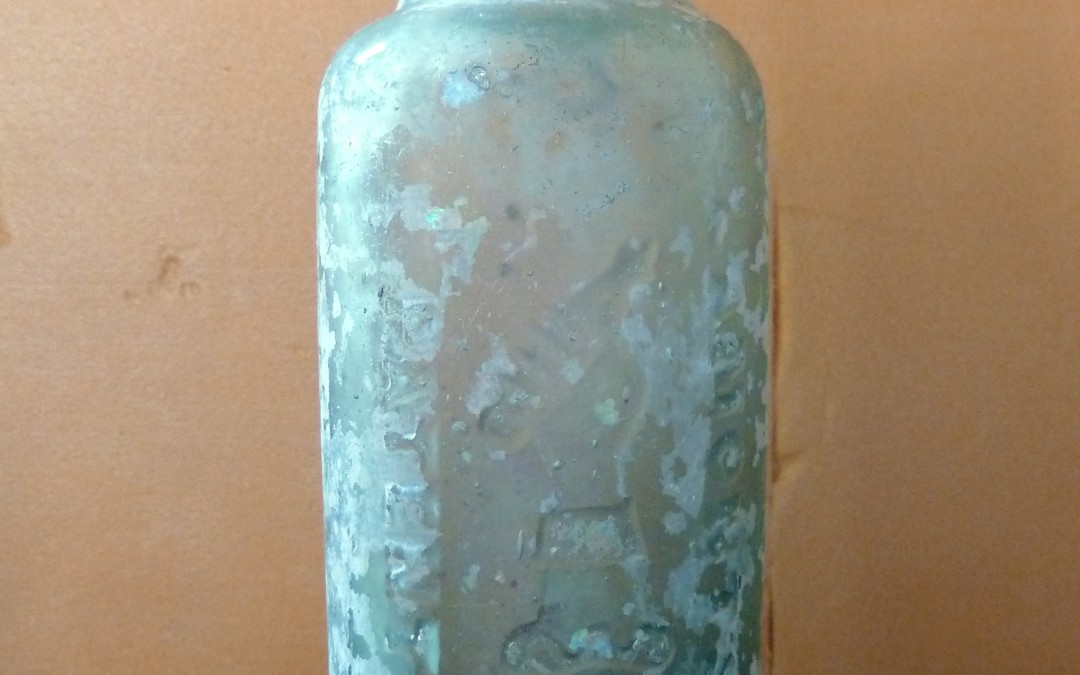 Lamont’s Patent mineral water bottle, embossed with a hand holding a bottle, and the name of the firm Forster G, Moore, New Conduit Street, King’s Lynn. Around the base, embossed ‘Lumb & Co, Makers, Castleford’. The stopper, a wooden bullet... 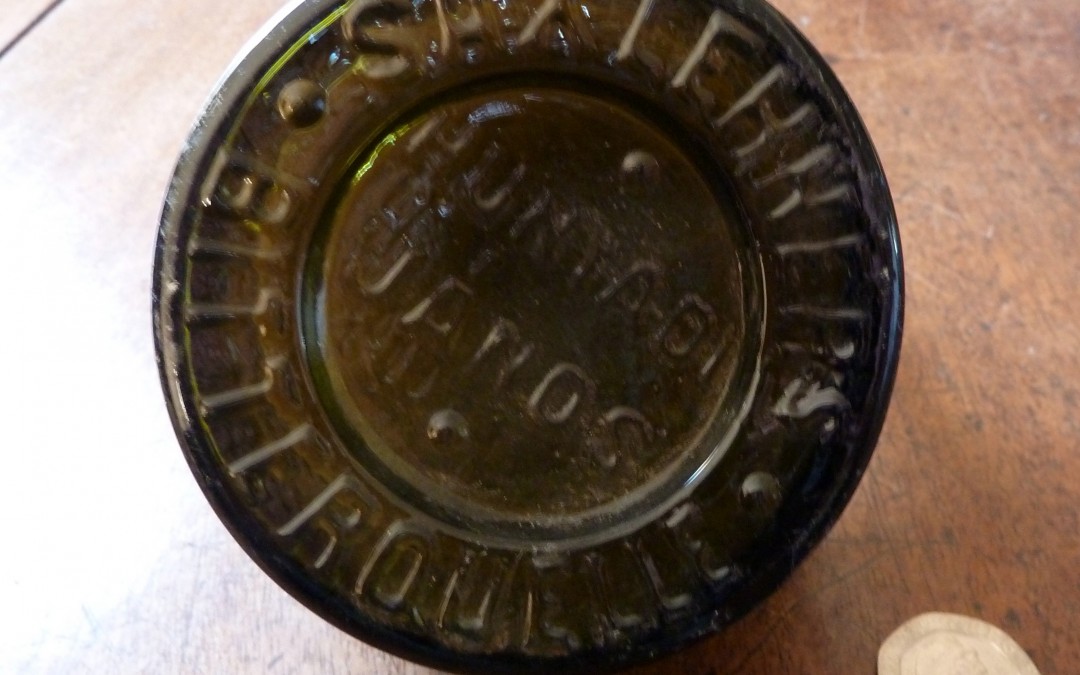 Green glass bottle (base only), embossed on the base ‘Hunyadi Janos, Saxlehners Bitterquelle’, for mineral water. It was regarded as a cure for constipation. This was imported and consumed at Kirton Rectory in the 1900s. 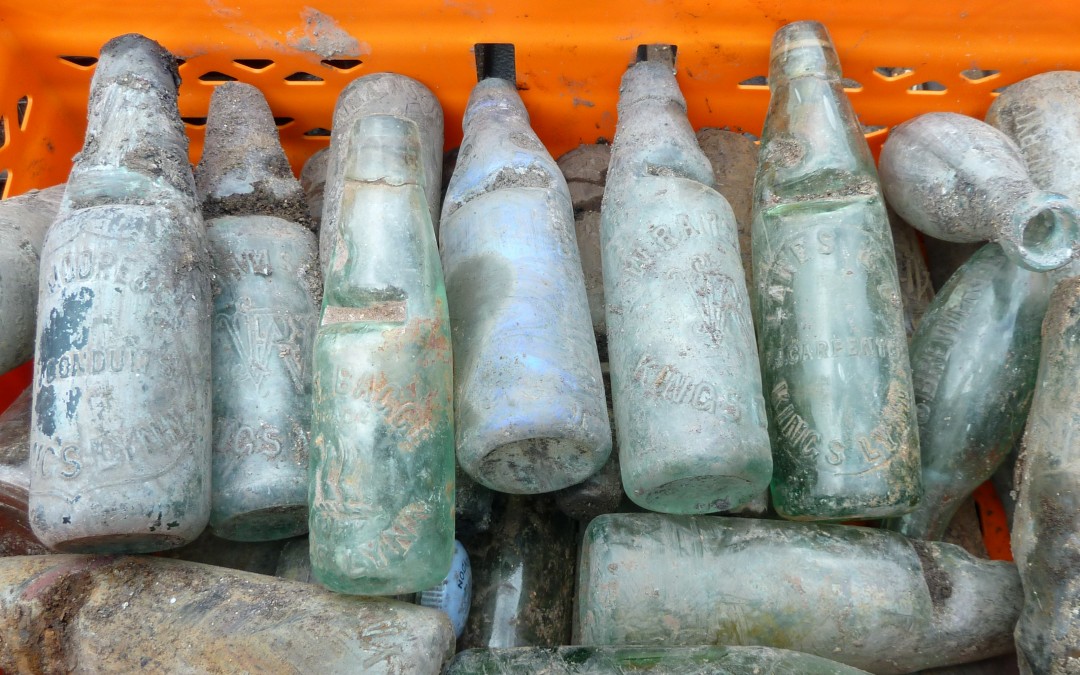 Codd bottles and other mineral water bottles, found in a dump of domestic waste in a trench at the King’s Lynn ash yard. 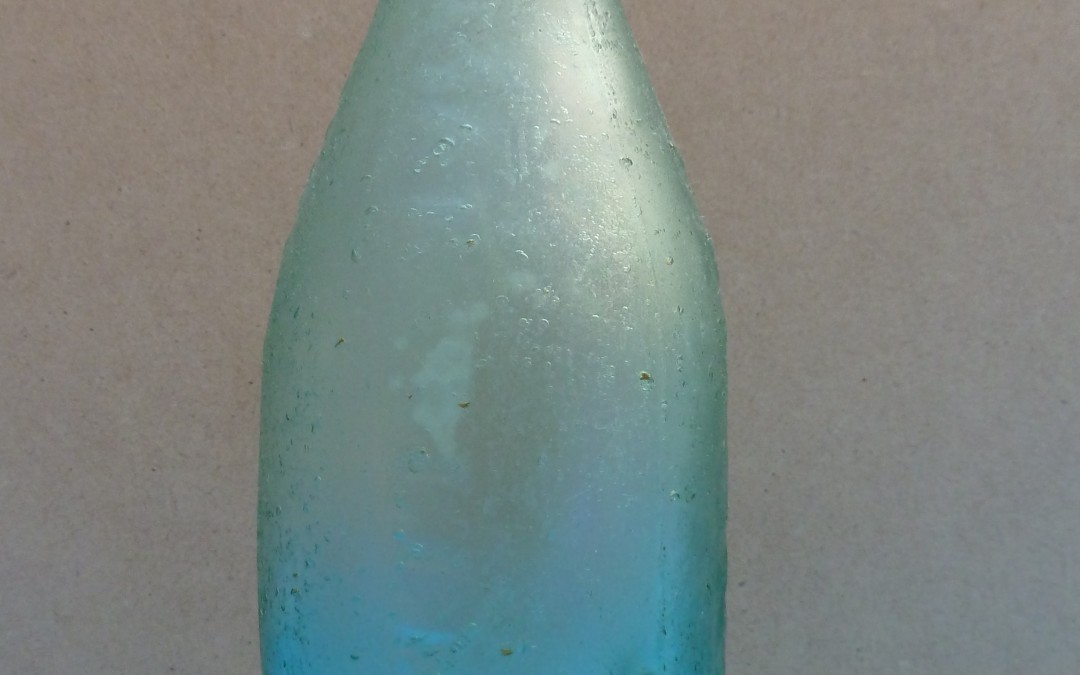 Early-Mid Victorian aerated waters bottle with an address at Artillery Row, Westminster. The cork on this bottle would have been at risk of drying out, causing the contents to go flat. The circular scar left by the removal of the glassblower’s pontil rod remains... 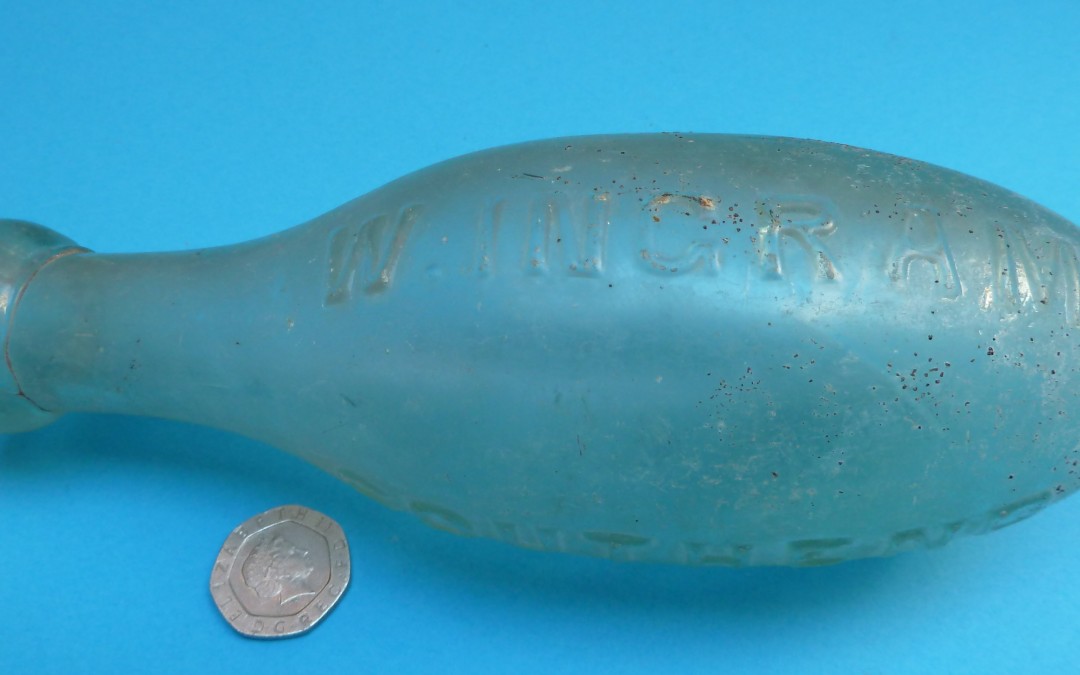 Hamilton bottle, embossed ‘W. Ingram/ Southend’, found during road works outside The Peter Boat pub, Leigh-on-Sea. These were used for mineral water or soda water. The design ensured that the bottles would be stored on their side, keeping the cork in... 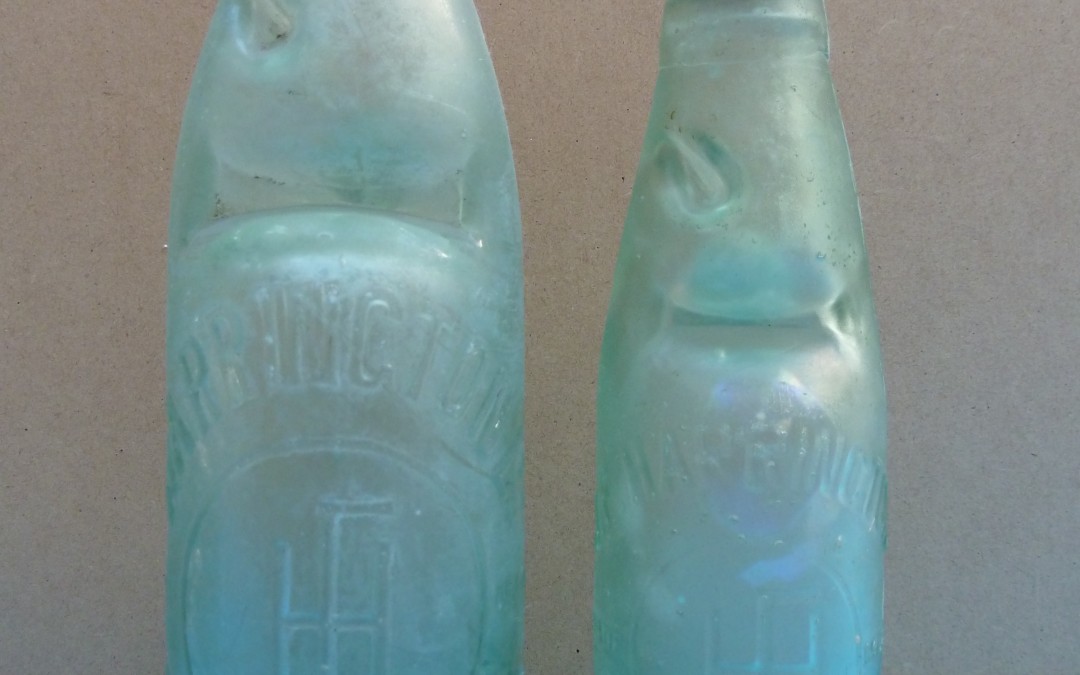 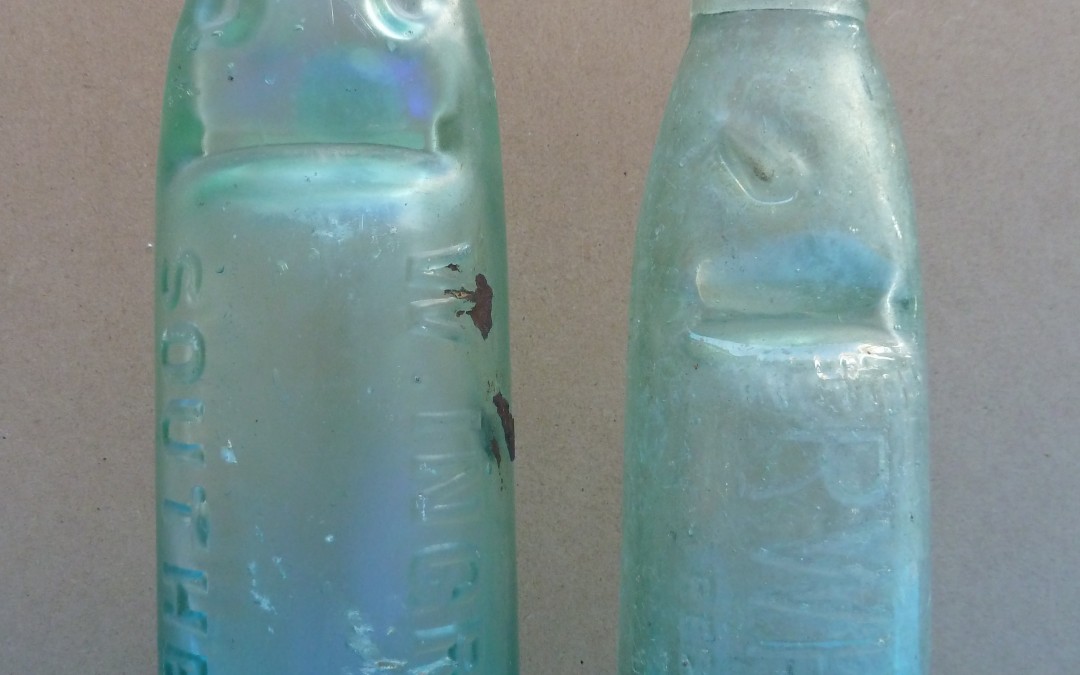 Codds for W. Ingram of Southend and R. White’s of London, who made lemonade etc. The larger one on the left has lugs to catch the marble when pouring on both the left and the right, so that the pourer did not have to turn it the right way round to prevent the...

Codd bottles embossed ‘W. G. Osborne & Son, Pall Mall, Leigh-on-Sea’. They contained lemonade or mineral water and retain the rubbing ring in the neck which held the marble when the bottle was full, forming an airtight seal. 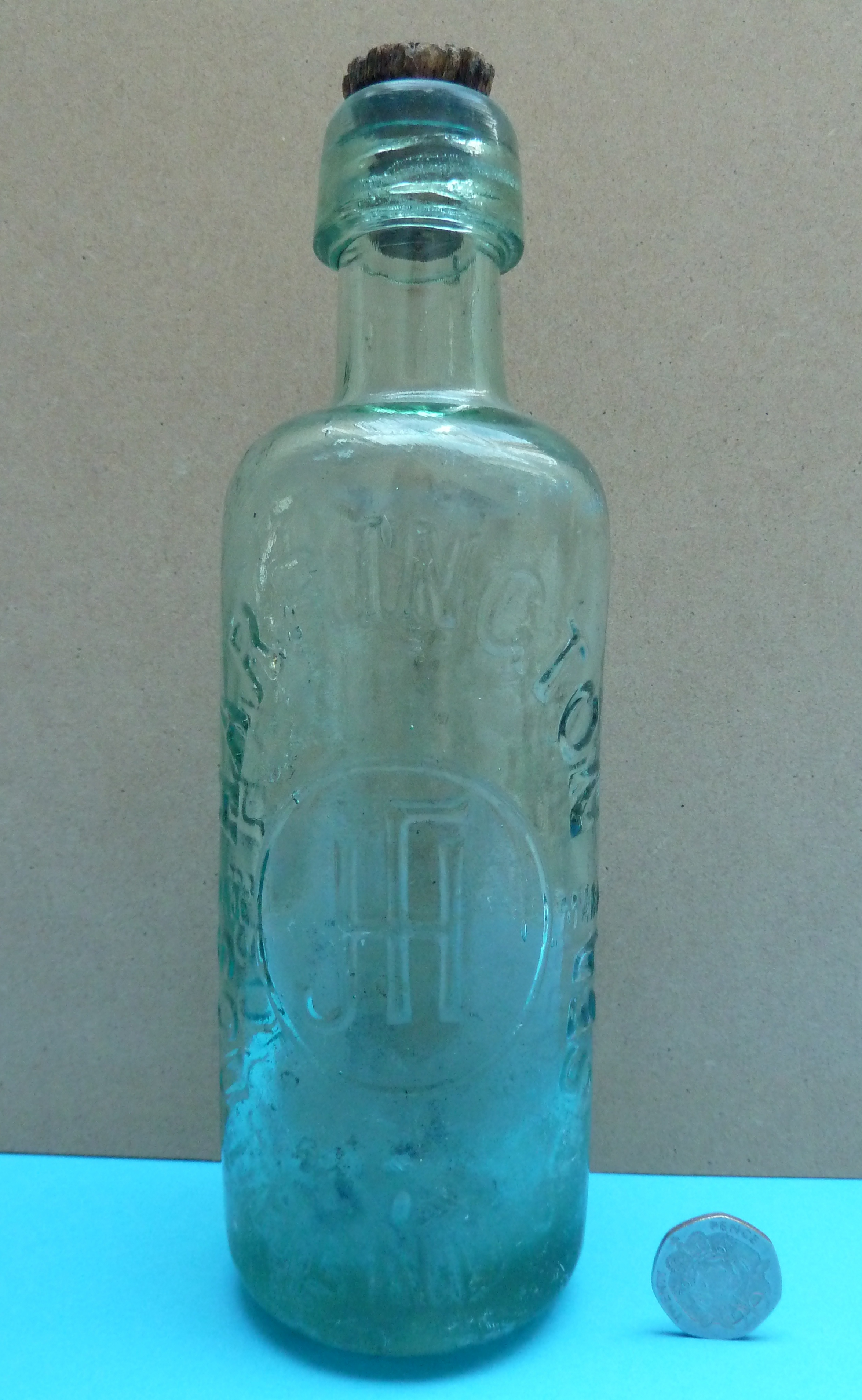