Rural re-use and Recycling between the Wars

Ringstead is a village in North West Norfolk, not far from Hunstanton. Early in 2016, a project team from What East Anglia Threw Away, excavated the village rubbish dump using garbology methodology. The site had been used between 1922 and c. 1960, but we focused on the parts containing rubbish from the 1920s and 1930s. In our earlier digs at the King’s Lynn town ash-yard, where refuse was dumped in the period 1883-1912 and also during the 1920s and 1930s, we found evidence of scavenging. Certain re-usable and returnable vessels such as jam pots, wine bottles and beer bottles had been systematically removed during both periods of tipping. So had scrap copper. King’s Lynn evidently sustained a mini-scavenging economy, which made it profitable for the waste to be sorted. Records of the Borough Sanitary Commission show that scavengers were operating there and paid for the right to remove whatever they wanted. Some of their pickings were stored in a shed on-site. It was even targeted, on one occasion, by thieves looking for valuable scrap. Nothing much changes!

Ringstead, being a rural area, was different. There was nowhere nearby where bottles and pots could be sold, and no-one locally seems to have dealt in scrap. The dustman had his wages, but it was not worth his while to spend additional time removing certain items because the expense of having to transport them to wherever he might be able to sell them eroded any profit to be had from the operation. It was simply not cost effective. As a result, our team recovered large numbers of marmalade and jam pots, wine bottles and beer bottles. The beer bottles all had proprietors’ names embossed on them and could have been returned for a farthing’s deposit at a time. We also found significant quantities of copper scrap, which had been virtually non-existent in the refuse discarded in the same decades at King’s Lynn. 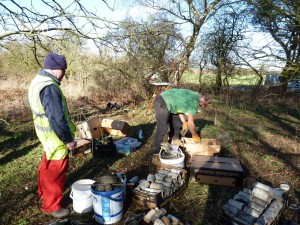 Right: Team members Mick and Paul load ceramic pots for jam and marmalade into boxes. Bread and jam were dietary staples in the 1920s. The average household got through large numbers of these pots, but there was still a re-use market for them at that date.

Below: eight boxes are filled with jam/ marmalade pots. 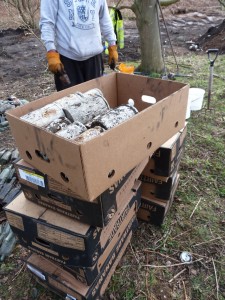 Below right: the pots in use in the 1920s and 1930s were mostly plain or had vertical bands, each about an inch wide and separated by grooves. The necks of the plain ones were sometimes flared, so that the cloth/ paper cover could be tied on firmly. Sometimes just a groove sufficed. Large two-tone pots like the one alone in the foreground contained jam sold in bulk quantities and were re-used but often discarded. Transfer-printed pots were also still in use. 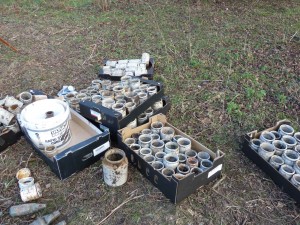 Beer bottles embossed with the names of proprietors in Hunstanton, Dereham, Wisbech, Wells, King’s Lynn, Norwich and farther afield were all, in theory, returnable at this date. Children would often wheel carts around, collecting these bottles and taking them back to shops. Four undamaged specimens were worth a penny, and a tidy profit could be had. At Ringstead, however, there were only a couple of shops and a similar number of pubs. Bottled beer by this date was becoming a common means of refreshment, so common in fact that it was not worthwhile either for shopkeepers or publicans to pay out a deposit on every bottle, when the beers came already bottled from various breweries, and sorting and returning them was unnecessary bother for everyone. 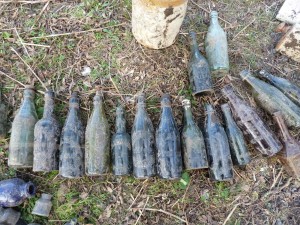 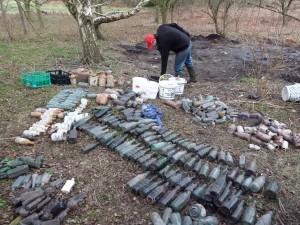 Above: a dozen embossed beer bottles.          Above: centre/ foreground – over 100 ‘returnable’ drinks bottles

The copper scrap discarded at Ringstead was potentially even more valuable than the ceramic pots and glass bottles, but a surprising quantity of it ended up in the refuse. In London, at this date, scavengers were rooting through dustbins for scrap metal, and, in many areas, rag-and-bone men would go round with their carts, and ring a bell, collecting it. 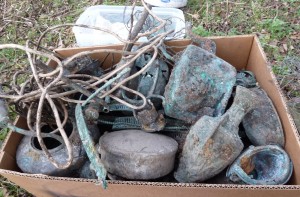 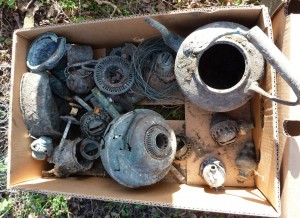 Amid all the waste one very interesting example of re-use came to light. Shortly after dumping began on this site, the Park Road Mineral Water Works, at Wells-on-Sea, passed from the hands of the Bullen Brothers into the possession of Robert Claxton, who had charge of it by 1925. He ordered stoneware ginger beer bottles with his name stamped upon them from the potter Skey of Tamworth, but, by that date, it was becoming expensive to order the traditional stoneware bottles as machine-made glassware increasingly undercut the market. Stoneware was already going out of fashion.

Claxton nevertheless wished to sell his product in bottles of the traditional style, so about the year 1928, he made a strategic decision to buy in a large number, second-hand, from the London firm of Bannister (Drury Lane), which in size and design were similar to the ones already printed with Claxton’s name. Claxton then simply stuck paper labels over Bannister’s stamp. It was cheaper than ordering his own bottles from Skey. A little later, however, he stopped using stoneware bottles, and because he no longer wanted them, someone living in Ringstead (possibly a publican or shopkeeper) cleared out all that he had. We therefore unearthed twenty or thirty of these bottles, some with Claxton’s name and some with Bannister’s. Many were broken in situ, but all appear to have been dumped intact; and most still had internal screw stoppers, which had been replaced, ready for re-use. These too revealed a mini re-use economy, in that they came from all sorts of bottles, including glassware beer bottles from other firms. Some stoppers were the usual Vulcanite; others were stoneware, including stoppers from herb beer flagons. One bottle, bearing Claxton’s stamp and made by Price of Bristol – the pottery used by the Bullen Brothers and by Claxton in the early days before he switched to Skey of Tamworth – had been matched with a stoneware flagon stopper (obviously a bit too large) bearing the name ‘I. W. Ramsbottom, Herbalist, Rawtenstall’. The stopper had somehow come from Lancashire. Another bottle in the hoard, bearing Bannister’s stamp, had a Vulcanite stopper incised with the names of the Norwich brewers ‘Steward & Patteson’. and the number 28, for the year 1928. In the photo below, four of the bottles can be seen with stoppers, two of them flagon stoppers. 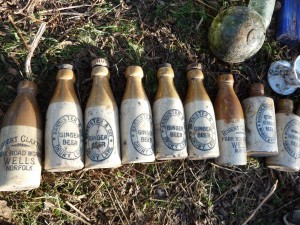 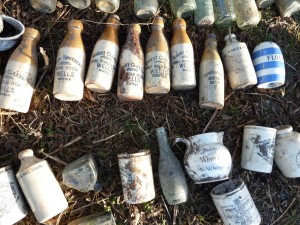 Above left: stoneware ginger beer bottles used by Robert Claxton of Wells, c. 1924-30. The Bannister bottles, though not exactly the same, were close enough. Above right: Claxton’s own bottles. The main difference in design between these and Bannister’s is that Claxton’s bottles have a collar below the lip. Note, in this photo, the two cream-coloured stoneware veterinary bottles, stamped with the words ‘Return to M. Bray, Docking’. Returning these was too much bother. Transfer-printed marmalade pots can bee seen bottom/ right corner.